Economic growth of 0.2% forecast for Northern Ireland next year, according to PwC 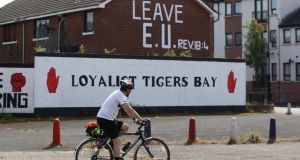 Economic growth in Northern Ireland is likely to fall to 0.2 per cent next year according to Price Waterhouse Coopers. Photograph: Pacemaker

Economic growth in the North is likely to fall to 0.2 per cent next year and while Northern Ireland may escape tunnelling back into a recession after the Brexit vote, it could be close according to new forecasts published on Tuesday.

PwC’s latest UK Economic Outlook highlights that the EU referendum result is expected to deliver a further slowdown in the UK economy, whose growth prospects had already eased back from 3 per cent in 2014 to about 2 per cent before the EU referendum.

But in the North the outlook is more gloomy with forecast growth slipping to about 1 per cent this year and sliding further to 0.2 per cent next year – which will position Northern Ireland as the worst-performing of 12 UK regions – behind both Scotland’s forecast growth of 0.3 per cent and Wales’s potential 0.4 per cent growth rate.

Dr Esmond Birnie, PwC chief economist in Northern Ireland, is also warning that quarter-on-quarter GDP growth could fall to close to zero in late 2016 and early 2017.

“In our main scenario, overall UK economic activity is projected to recover gradually later in 2017 as the immediate post-referendum shock starts to fade.

“This scenario suggests that the UK and Northern Ireland would avoid recession, although there are still significant uncertainties around this view. Alternative scenarios could see overall UK GDP growth in 2017 of anywhere between +1.5 per cent and -1 per cent, although even this latter, relatively pessimistic scenario would not be a severe recession of the kind seen in the early 1980s or in 2008-9.”

Dr Birnie said the key reason for the projected slowdown is because of the predicted decline in business investment particularly from overseas business – which would be alarming for the North as it gears up to launch its own lower rate of corporation tax in April 2018 aimed at attracting new foreign direct investment.

The Northern Ireland economist also believes that construction companies and capital goods manufacturers could be relatively exposed to a short-term cyclical slowdown.

But he said export-focused businesses could benefit from the weaker pound should which should move “from being a drag on overall UK GDP growth in 2015 to a positive contributor in 2017”.