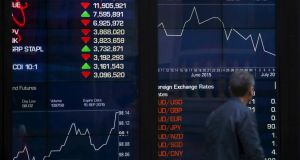 European shares surged on Monday after euro zone leaders reached an agreement to move forward with a bailout loan for Greece to avert bankruptcy, following all-night talks in Brussels.

European Commission president Jean-Claude Juncker said there would be no Greek exit from the euro currency union, adding that he was convinced that Greek government and the Greek parliament would be able to pass all the decisions agreed at the summit.

While the Greek benchmark Athens Stock Exchange has been closed since June 26th, US listed Greek equity assets surged by over 10 per cent in pre-market trade.

“For the markets, it’s clearly positive that there is an agreement among the European member states and that there is an atmosphere of co-operation,” Philippe Gijsels, head of research at BNP Paribas Fortis Global Markets in Brussels, said. “Still, there is a bit of execution risk which may haunt us in terms of volatility.”

The euro zone’s blue-chip Euro STOXX 50 index hit a two-week high and was up 2 per cent in early morning trading. It is up over 9 per cent since last Tuesday’s close. The pan-European FTSEurofirst 300 index rose 1.8 per cent to 1,570.10 points. Germany’s DAX, France’s CAC and Britain’s FTSE 100 rose 0.7 to 2.2 per cent. The euro zone’s banking index advanced 2.7 per cent, helped by a 2.6 to 3.5 per cent rise in shares of Societe Generale, Credit Agricole and UniCredit . The region’s volatility index, a crude indicator of investor concern, dropped 3.6 points to hit a two-week low.

Ronny Claeys, senior strategist at KBC Asset Management, said that in the long run, investors will try to find answers to questions such as whether the deal Athens has agreed with its European peers fundamentally resolves the issue of Greece’s debt burden.

Shares in mid-cap Alent spiked 44 per cent after US chemicals maker Platform Specialty Products said it would buy the British company for about £1.35 billion in cash to expand its portfolio and save costs.

Among fallers, International Personal Finance dropped 14 per cent, the biggest drop on the STOXX Europe , after a proposed law change in Poland that may hit the firm’s results.

1 Why gift a son now if it eats into his tax-free inheritance threshold?
2 Dublin council puts Unicorn restaurant demolition plan on hold
3 Can we finally say farewell to the scourge of hot-desking?
4 Mortgage arrears: Prevention is definitely better than cure
5 Dispute over €2.95m sale of Georgian property struck out
6 Big Four told to outline plans for audit split in UK by October
7 Flights abroad ban could last all summer
8 Ballymore acquires London shopping centre for €83m
9 Deloitte was top Irish dealmaker in first half of this year
10 All parties to High Court hearings told to wear facemasks
Real news has value SUBSCRIBE