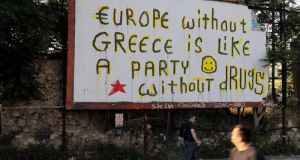 A man walks past graffiti in Athens. Greek bond yields were up by 10 percentage points this morning

Government borrowing costs in Europe’s southern countries shot up on Monday as unsettled investors responded to raised expectations that Greece could leave the euro zone after Athens closed its banks and introduced capital controls.

In the first major sign of contagion since Europe’s 2011-2012 financial crisis, Italy, Spain and Portugal saw their 10-year bond yields rise sharply, pulling away from German equivalents which are seen as a safe haven in times of stress.

If Greece were to exit the euro zone it could raise the risk for investors that other heavily-indebted member states might follow suit.

The gap between Spain and Germany’s borrowing costs was the widest in almost a year. Strategists said the market reaction could become more pronounced as the week progresses, with the European Central Bank set to assess its emergency funding to Greek banks on Wednesday and the country poised to vote on creditor demands on a reforms-for-cash deal this weekend.

Greece is also set to fail to repay €1.6 billion of loans from the International Monetary Fund that fall due on Tuesday.

“The market has increased the possibility in its mind that these events trigger some sort of exit,” said Michael Michaelides, a strategist at RBS. “Investors are viewing next Sunday’s vote as a de facto referendum on membership of the euro area.”

Greek bond yields also rose around 10 percentage points, according financial platform Tradeweb, although strategists cautioned that capital controls would likely restrict trading from domestic banks which hold most of the country’s debt. Athens’ main stock market was also closed on Monday and is due to stay shut all week.

Tradeweb prices showed Greek two-year bond yields rising over 1200 basis points to around 33 per cent, while 10-year yields were up 300 bps at 14.15 per cent.

German 10-year yields - the European Union’s benchmark - were down around 14 bps at 0.78 per cent, having touched a one-month low of 0.71 per cent in early trade. Portuguese, Italian and Spanish equivalents were all up around 20 bps on the day at 3.00 per cent, 2.35 per cent and 2.31 per cent, respectively.

Europe’s stock markets and the euro also fell. While investors took a cautious approach ahead of the weekend vote, some kept faith in the resolve of European policymakers to keep Greece in the euro and firewalls put in place since the financial crisis to stem market contagion.

Goldman Sachs speculated last week that the European Central Bank may step up its bond-buying programmes in the wake of a Greece default to soothe investor nerves.

“The threat to the euro zone is perceived as being much less than in 2011 when the region was much more fragile following the global financial crisis,” said Lorne Baring, managing director, B Capital Wealth Management.

“We expect downward pressure to resume with this new twist in the Greek saga but it may be short-lived as the political pressure to resolve the situation mounts.”