Making the case for the power of marketing and PR 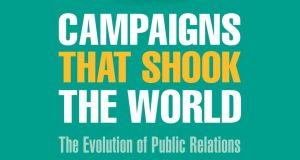 Campaigns That Shook The World is written by Danny Rogers, and published by Kogan Page, priced €18.99

Given the title of this book by seasoned UK media and marketing journalist Danny Rogers, it is perhaps unsurprising that it opens with accounts of the marketing of two of the most influential political figures in Britain in modern times.

The background story of the marketing of Margaret Thatcher emphasises how simple the narrative was. A key moment was a speech to the Conservative Party conference in 1978 which took a controversial line on immigration control. Unlike previous leaders, she struck a chord with ‘the man on the street’ and tailored her messages to dissatisfaction with perceived weak political leadership.

Courting the media – particularly the formerly Labour-leaning Sun newspaper – and the voice-coaching of Thatcher by actor Laurence Olivier to turn shrill into husky were ingredients as was the classic Saatchi & Saatchi “Labour isn’t working” 48-sheet poster showing a long unemployment clue. Thatcher didn’t get the idea initially and had to be swayed before concurring that it was “wonderful”. Labour chancellor Denis Healy, however, reportedly went “ballistic” when he saw it and accused the Tories of “selling politics like soap powder”.

The campaign was effective, Rogers, concludes, because it communicated a feeling – be it despair at Labour or hope for a better future – rather than a rational argument. As well as this emotive feeling, advertising and editorial communications knitted together in one team.

Dealing with the newly emerging 24-hour rolling news coverage, the team worked hard and fast, setting up rebuttal units to fight damaging stories. It also introduced the concept of ‘The Grid’, a single-page guide within the strategic communications framework. It brought sharp coherence to a campaigning party or government alike. It enabled Campbell to keep track of what various ministers were doing and saying, enabling dominance of the media agenda. Shortly after Labour took power, Britain’s royal family faced a major crisis in the wake of the death of Princess Diana, another campaign examined here. In its early stages, the campaign was characterised by an aggressive approach towards the press, arguably necessary at first but to the detriment of the monarchy, Rogers argues.

This changed over time, with broadcast and photographic opportunities transforming the family image and social media being embraced to create a more transparent and sympathetic image. Nevertheless, there is a sense, the author feels, that the monarchy went too far in trying to bring the press to heel, without establishing mutual trust, which may store up problems for the future.

By contrast, the book looks at more commercial endeavours, including the campaign to transform David Beckham into one of the most recognised sports brands in the world. By the time he retired from football in 2013, Beckham was earning £30 million from commercial ventures and endorsements, and embarking on new types of partnerships with fashion brands, hotel groups and media organisations.

From the very early days, Beckham recognised the power of his own image and his partners and advisers have managed these assets creatively.

Amongst the other case studies in the book are Bono and cause marketing, Barack Obama’s election as US president and Dove’s innovative beauty campaign.

Rogers has written an interesting series of case studies and in a wrap-up chapter concludes that the single most important thing that will define the campaign stars of the future is a strong sense of personal purpose. Shaking the world is one thing – improving it demands true ambition and purpose.