What is weighing down the car insurance industry?

If the State wants to reform the sector, it needs to start gathering some basic data 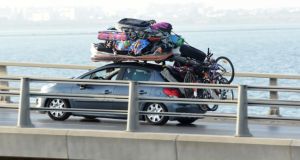 The cost of car insurance is said to have increased by 70 per cent over the past three years. Photograph: Fethi Belaid/AFP/Getty Images

It is interesting to look at the extraordinary rise in the cost of car insurance through the prism of the data available from the Personal Injuries Assessment Board (PIAB).

The cost of car insurance is said to have increased by 70 per cent over the past three years and, according to the Central Statistics Office, to have jumped by 38.3 per cent in the past year alone.

Explanation for such an unsustainable surge in the cost of premiums has included comments from the insurance industry that they reflect a rise in the size of court awards, and an increase in the number of cases going to court.

Yet the PIAB has not recorded any major change in the number of people who are refusing to accept the assessments suggested to them by the board. The board assesses the value of all claims where liability is not contested, and if the parties are not happy with the assessments, they are free to go to court and try their chances there.

Had there been a dramatic increase in the size of awards being given out in the courts, one would expect this to contribute to an increase in the percentage of PIAB assessments being rejected by claimants who chose to go to court instead. But this is not the case.

The assessments arrived at by the PIAB come from its so-called book of quantum – a guidebook on how much should be awarded for particular injuries, based on data from insurers, the State claims agency, the courts and the board itself. So they are, in essence, assessments based on market data, and they haven’t been rising at anything like the rate of car insurance premiums.

Also, a massive differential developing between the size of awards in the book of quantum and those available from the courts would be expected to persuade more people to risk the cost of going to court. But that hasn’t been happening. Furthermore, since 2014, the courts have been instructed to use the book of quantum as a guide for their awards.

Another suggested driver behind the rise has been the alleged increased involvement of solicitors. Some 90 per cent of the cases that come before the PIAB involve the use of a solicitor, but that has remained steady in recent years. The cost is paid by the claimant and does not influence the assessments.

Other factors mentioned include historical underpricing during the boom, the cost of paying for the collapse of Setanta Insurance, low bond yields, and other factors that mean insurance companies have to rely more heavily on premiums to create adequate reserves and profit margins that make the insurers sustainable.

Unlike many other jurisdictions, including the UK, the Irish car insurance market does not have publicly-available aggregated information on issues such as the number of claims each year, their average size, the legal costs associated with processing the claims, etc.

If we want to diagnose what is wrong with the car insurance market here, a good place to start would be with a reliable examination of the patient. That might allow the contributors to the huge rise in premiums to be identified, and each to be given a relative weight. What to do about the crisis could then be addressed.

Amazon union battle is only the beginning of a bigger conflict

1 DCU rolls out e-scooter scheme on its campuses

6 US investor ‘not planning’ Hostelworld bid after building 13% stake

7 Dublin is fifth most expensive place for renters in Europe

10 Forget DeLorean, Ireland could be an electric car-making hub