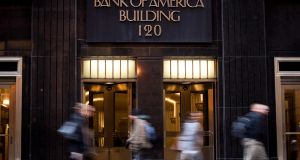 Bank of America building in Chicago: The “living will” plans are intended to prevent more taxpayer bailouts of big institutions and the kind of chaos sparked by the 2008 collapse of Lehman Brothers. Photograph: Christopher Dilts/Bloomberg

Five big US banks including JPMorgan Chase and Bank of America have been warned by regulators to reform or face harsh sanctions after their plans to show how they could be wound up in a crisis were deemed inadequate.

The “living will” plans – a central pillar of post-financial crisis reforms – are intended to prevent more taxpayer bailouts of big institutions and the kind of chaos sparked by the 2008 collapse of Lehman Brothers.

In addition to their judgments on JPMorgan and Bank of America, the top US banking regulators said yesterday that Wells Fargo, Bank of New York Mellon and State Street had also delivered plans that were “not credible or would not facilitate an orderly resolution” in a crisis.

The rulings come as the US presidential campaign has refocused debate over whether the country has achieved the post- crisis objective of ensuring no bank could be “too big to fail”.

or face more stringent regulations, including higher capital, leverage or liquidity requirements, and the forced divestment of assets or operations.

Tom Hoenig, vice-chairman of FDIC, said: “[Each] plan has shortcomings or deficiencies, although . . . some firms have made more progress than others. Most importantly, no firm yet shows itself capable of being resolved in an orderly fashion through bankruptcy.

“Thus, the goal to end too big to fail and protect the American taxpayer by ending bailouts remains just that: only a goal.”

Senior regulatory officials said the five banks should be capable of correcting the problems by the October deadline but added that doing so would involve some difficult choices.

The two watchdogs disagreed about the two big US investment banks: FDIC rejected Goldman Sachs’s plan but accepted Morgan Stanley’s, while the Federal Reserve did the opposite. Both regulators found deficiencies in Citigroup’s living will but did not conclude that it was “not credible”.

The critical judgments mark the second time that US banks’ living wills have fallen short in the eyes of the Fed or FDIC.

This time the shortcomings varied by bank but included flawed computer models; inadequate estimates of liquidity needs; questionable assumptions about the capital required to be wound up; and unacceptable judgments on when to enter bankruptcy.

“Having answers to these issues for each [systemically important bank] is critical to successfully move one through bankruptcy,” Mr Hoenig said.

In similar statements, the five banks expressed their commitment to addressing their shortcomings, which they said they took seriously, but also noted that regulators said they had made some progress.

Voicing discontent over the process, however, Marianne Lake, JP Morgan’s chief financial officer, said it had received details of the regulators’ decision less than 24 hours before it was made public, which occurred on the morning her bank released its quarterly earnings.

The banks’ share prices were all up in New York trading.