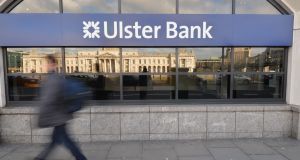 Royal Bank of Scotland bought Ulster bank in 2000 as part of its acquisition of National Westminster Bank. Bankrolling some of Ireland’s biggest property developers, its assets more than doubled in the four years to the end of 2008, when the bubble burst. The UK government owns 72 per cent of RBS as a result of a bailout during the crisis.

Ulster Bank is lining up the sale of €875 million of troubled mortgages belonging to uncooperative customers who are deep in arrears and litigation.

The mortgages, a third of which are against 900 private dwellings, are part of a broader portfolio of loans with a par value of €2.5 billion that the UK government-controlled lender is launching this week. The loans will be sold at a discount, reflecting the fall in asset values since the outset of the financial crisis.

This is seen as the last major portfolio sale by Ulster Bank, after years of restructuring and asset sales. PricewaterhouseCoopers has been hired to sell the loan book, which has been given a working title of Project Oyster.

It is understood that some 88 per cent of the mortgage loans, about half of which are against properties in the greater Dublin area, are more than three years in arrears. Most have had two court dates.

Two thirds of the total portfolio is against business loans, mainly to small-to medium-sized enterprises, which have been in default for some time and typically have a property element to them.

About €100 million of the soured assets are loans out to farmers, much of which relates to property deals during the boom.

The agriculture loans are said to have been the subject of arrears management for some time and not to result of heavy borrowing and investment by farmers in milk production before EU quotas ended last year. The dairy industry has since been hit by a collapse in milk prices amid a global glut in supply.

“Ulster Bank has confirmed a significant impaired loan portfolio sale, enabling the bank to strengthen its balance sheet for the benefit of its customers and much needed competition in the banking market,” a spokeswoman for the company said, declining to comment on details of the sale.

“The loans involved do not belong to typical customers; they are all in Ulster Bank’s problem debt management unit and in arrears or under specialist management for some period of time.”

Royal Bank of Scotland bought Ulster bank in 2000 as part of its acquisition of National Westminster Bank. Bankrolling some of Ireland’s biggest property developers, its assets more than doubled in the four years to the end of 2008, when the bubble burst. The UK government owns 72 per cent of RBS as a result of a bailout during the crisis.

The Republic of Ireland part of Ulster Bank had almost €47 billion of loans out to customers at the end of 2008. It now has about €24 billion of loans, three quarters of which are in the retail part of the bank, with the remainder in commercial banking.

The retail bank plans to increase mortgage lending this year to €950 million from €700 million in 2015, while new commercial lending is expected to rise to about €1.5 billion from €1.1 billion.