UK plans to sell half of RBS stake over two years 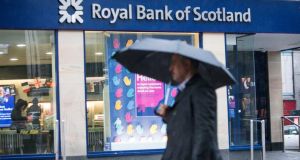 UK chancellor of the exchequer George Osborne has indicated that he wants to begin reducing the government’s £32 billion stake in RBS. Photograph: Danny Lawson/PA Wire

Britain is planning to sell half its stake in Royal Bank of Scotland, worth £16 billion, within two years, according to sources have said.

Chancellor of the exchequer George Osborne has indicated that he wants to begin reducing the government’s £32 billion stake in the coming months, but the sources said the shares will be sold at a faster rate than previously expected, making it likely the government will take a substantial loss on the initial sales.

Final decisions on Britain’s biggest privatisation have yet to be made and progress will depend upon RBS’s performance, market conditions and ongoing investigations into past misconduct, the sources said.

Britain pumped £45.8 billion pounds into RBS to rescue the bank during the 2007/09 financial crisis, leaving the government with a 78 per cent stake. At current share prices the government is sitting on a loss of £14 billion.

RBS Chairman Philip Hampton, who is leaving the bank this year, and former CEO Stephen Hester had both said previously that it could take several years for RBS to return to private ownership, given the amount of shares to be sold.

Although Mr Osborne had been reluctant to sell at a loss, the bank’s improving performance and the increased political leeway afforded by the Conservative party’s majority election victory in May have persuaded him now is the time to sell.

The treasury declined to comment on whether Mr Osborne will talk about an RBS stake sale when he delivers Britain’s Budget on Wednesday, the first since May’s election victory.

Boosting the chances of a faster than expected RBS privatisation is a British and Irish economic recovery that has enabled the lender to recover debts it had previously written off and to lift operating profit by 16 per cent in the first quarter.

The RBS revival has attracted interest from investors looking to benefit from Britain’s economic recovery, including many in the United States, banking sector sources said.

Analysts expect the bank to have surplus capital by the end of 2016, offering the prospect of a high dividend yield in the longer term.

“Investors are really keen. They understand what RBS wants to be,” one investment banker said. “They are prepared to sit and wait. Pay up now for the prospect of a dividend in two to three years.”

RBS, which briefly became the world’s biggest bank after an acquisition binge under former CEO Fred Goodwin, has undergone a complex restructuring to focus on lending to British households and businesses.

The turnaround, however, has taken far longer than that of state-backed rival Lloyds Banking Group, which the government is selling at a profit en route to a planned return to full private ownership next year.

A first sale of RBS shares to financial institutions such as pension funds and insurers is earmarked for September and could raise about £1.5 billion, one of the sources said.

Yet significant challenges could still upset the plans. The biggest could be RBS’s impending settlement in the United States relating to the mis-selling of mortgage-backed securities. Court documents filed last month suggested it could have to pay $13 billion to settle the claims..

RBS must also pay the UK treasury a further £1.18 billion to cancel an arrangement that gives the government priority over dividends.

Shares in the bank were down 2.9 per cent on Monday, in line with the European banking sector’s decline after Greeks overwhelmingly rejected a rescue package from the country’s creditors.

9 Technology really can be stranger than fiction at times