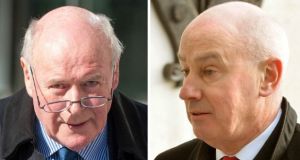 Two former Anglo Irish Bank officials have had their convictions for conspiracy to defraud Revenue and falsify records quashed at the Court of Appeal.

Mr Justice George Birmingham, sitting with Mr Justice Garrett Sheehan and Mr Justice John Edwards, said in the case of Mr Daly they would not order a retrial, but a retrial was not precluded in Mr O’Mahoney’s case.

The two men, along with former assistant manager Aoife Maguire, were originally charged in November 2013, 10 years after the offences alleged.

In the judgment, the court found the substantive charges against the men - that they had furnished a list of bank accounts to Revenue that omitted a particular bank account that should have been included - were not the charges originally brought against them in November 2013.

“It is impossible to avoid the conclusion that the decision to reformulate the charges, and in effect to recharge, was as a result of the fact that the prosecution discovered that there was a complete defence to the charge that had been presented originally,” Mr Justice Birmingham said.

The court found the actual offence brought was not brought “within the 10-year window that was available”and was “out of time”.

Mr Justice Birmingham also said the trial judge, “while well-intentioned”, was “in error” when he adjudicated on the admissibility of certain documents in the trial without first hearing oral evidence. The documents were, for the most part, vital to the prosecution case.

“The procedure that was followed was, in the circumstances, a flawed procedure,” he said.

He also said there was no doubt Mr Daly’s involvement in the alleged conspiracy to defraud Revenue and falsify bank accounts “would have been helpful”, but there could be “no real doubt that the conspiracy could have proceeded without him”. Evidence was “thin” and “tenuous”, and the charge should have been withdrawn.

“The case which the prosecution was in a position to mount on the conspiracy charge could not, by any stretch of the imagination, be seen as a strong one,” he said.

Mr Justice Birmingham said in the case of Mr Daly, because the jury ought to have been directed on the conspiracy charges, and the substantive charges against him were out of time, the issue of a retrial did not arise.

In the case of Mr O’Mahoney, there were possible issues of inadmissibility of evidence, but there was a possibility of a retrial.

Mr Daly walked free from court on Tuesday morning. His solicitor, Julie Burke of JM Burke Tax Solicitors, read a short statement on his behalf. She said he was delighted with the success of the appeal against his conviction and wished to thank his wonderful family and friends, who had given him “steadfast support and encouragement since the onset of his ordeal in November 2013”.

“He stresses that since 2013 he has consistently maintained his innocence of the serious charges levied against him,” Ms Burke said.

Mr O’Mahoney, who had also been convicted of conspiracy charges on additional accounts, was released on bail. On April 14th, the court will consider arguments on whether or not he should be retried.

Last December, the Court of Appeal quashed an 18-month sentence imposed on Ms Maguire for her role in the conspiracy. The court said the sentence was too severe.

They substituted a new nine-month sentence in its place and suspended the unserved portion, releasing her from prison. She had not appealed her conviction.