Stocktake: Investors have little to cheer despite 40% rise in Nokia stock on Microsoft deal 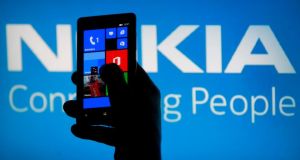 Nokia shares soared 40 per cent last week following the sale of its mobile business to Microsoft, and have more than tripled since 2012’s 17-year low, but chief executive Stephen Elop won’t be doing victory laps.

Nokia was in trouble by 2010, when Elop took over and decided to tie the company to the Windows platform, although its market cap was still twice today’s levels.

That year, Gartner estimates, Nokia controlled 34 per cent of the global smartphone market, a figure that fell to 17 per cent in 2011 and 3 per cent today.

Note Apple’s smartphone market share has been static (around 16 per cent) in that time. Samsung, which focused on Android, has been the real beneficiary of Nokia’s decline, its market share soaring, almost quadrupling to 31 per cent.

As the FT’s Lex column noted, shareholders “should be spitting, not relieved”.

Pedantic types might quibble with the word “warning”. After all, Ryanair said profits would be at the lower end of guidance (€570 million to €600 million), and were “unlikely” to be below that range.

Analysts think Ryanair is “always low-balling the guidance” but will “continuously beat our numbers because we always beat our numbers”, he said in a conference call. Over-bullish estimates forced Ryanair to “refocus” expectations “on where our guidance is, not on where the analysts wish it to be”.

Analysts might counter that Ryanair, like Apple under Steve Jobs, is a serial offender in the game of “under-promise, over-deliver”. The last time it warned profits would be at the bottom of its guided range was in 2009; the last time it missed its profit forecast was in 2004. This time, analysts – and investors – discovered the dangers of being priced to “beat and raise”, as Merrill Lynch put it.

No brokerage was as badly caught out as Morgan Stanley, however. The day before the warning, it said investors were “unduly nervous”. Ryanair’s valuation “compels” a position, with 44 per cent upside likely.


Analysts are ‘always too optimistic’
Wall Street third-quarter earnings forecasts have been slashed, from a projected increase of 16 per cent last October to just 3.7 per cent today.

Fourth-quarter growth estimates, too, have fallen from 18 per cent in January to 10 per cent today.

It doesn’t matter, according to Morgan Stanley bull Adam Parker, analysts are always too optimistic.

Since 1976, the median growth forecast in January for the year ahead has been 14 per cent, he found, compared to actual growth of just 5 per cent.

Analysts invariably have to reduce estimates as the year progresses.

Stocks, of course, have done just fine since 1976.

“The market can work well even as the base case is being revised downward,” said Parker, who predicts 12 per cent upside for the S&P 500.

DI Corp was founded by the rapper’s father, who remains chairman, with the resultant publicity driving the stock skyward. Despite subsequently plunging, the stock still ended 2012 roughly double its pre-Gangnam price.

Why? A new study discusses the investor recognition hypothesis developed by Nobel laureate Robert Merton. Countries displaying the most enthusiasm towards Gangnam Style (as deduced by the number of parody videos and flash mobs uploaded onto YouTube) saw the highest level of investing in DI Corp, the study found.

Investor awareness has long-term as well as short-term consequences. “In such a case, [part of] the stock price increase would be permanent,” the authors suggest. That certainly seems to be the case – DI Corp is up another 150 per cent in 2013.

The study is at http://iti.ms/15GXBcT

White’s targets way off the mark
It’s true that analyst share price targets are a bit of a joke but there’s usually some pretence as to their seriousness, with all kinds of fundamental quackery outlined to justify a particular price point.

US analyst Brian White, however, doesn’t try to disguise just how gimmicky his targets are.

But as Apple shares tanked, he lowered his target to $888.