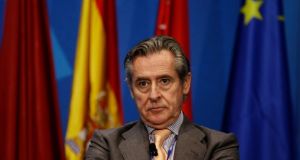 Spanish judges this week sent the strongest signal yet that they intend to crack down on former executives at bailed-out banks by putting the ex-president of Caja Madrid into custody in the first detention of a top financier since the financial crisis began.

Amid intensifying anger at a banking crisis that last year forced Spain to accept a European rescue for its lenders, Miguel Blesa, the 65-year-old former head of the bank, the precursor to the rescued Bankia, will remain in jail ahead of trial until he posts bail of €2.5 million. Mr Blesa’s lawyers were yesterday finalising the bail deposit, Spanish media reported.

According to the court ruling, Mr Blesa is being investigated because he did not conduct appropriate due diligence when Caja Madrid purchased City National Bank of Florida in 2008, with the $1.1 billion acquisition having potentially resulted in losses of at least €500 million. He is also being investigated for loans made to a now collapsed Spanish tour operator.


Banking reform
Soraya Sáenz de Santamaría, Spain’s deputy prime minister, said the government would respect the decision of the judge and reiterated the measures taken by Madrid to reform and depoliticise the country’s regional savings banks, known as cajas.

Other former executives from Spain’s once numerous cajas, entities dominated by politicians that fuelled a decade-long construction binge, have kept low profiles during the crisis but the majority continue to live undisturbed by widespread public anger.

Rodrigo Rato, the former IMF managing director, who took over Caja Madrid from Mr Blesa in 2008 and merged it with six other savings banks to form Bankia, returned to Spanish business less than a year after the bank’s rescue by taking an advisory role at Telefónica.

Mr Blesa, who enjoyed close ties with the ruling Popular Party, ran Caja Madrid for 13 years up to 2008, when he was ousted by the then PP president of the Madrid region, Esperanza Aguirre. – Copyright The Financial Times Limited 2013