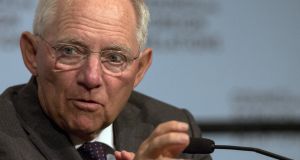 German Finance Minister Wolfgang Schauble said he’s not worried about Deutsche Bank after the shares and bonds of Germany’s biggest lender took a battering over investor concern about capital and funding levels.

German Finance Minister Wolfgang Schauble said he’s not worried about Deutsche Bank after the shares and bonds of Germany’s biggest lender took a battering over investor concern about capital and funding levels.

“No, I have no concerns about Deutsche Bank,” Mr Schauble said after a meeting of French and German finance chiefs on Tuesday. He didn’t elaborate further.

Deutsche Bank co-chief executive officer John Cryan told employees in a memo that the bank is “rock solid,” has a “strong” capital and risk position as he reassured the market of the bank’s ability to meet coupon obligations on its riskiest debt. Mr Cryan has been seeking to boost capital buffers and profitability by cutting costs and eliminating thousands of jobs as volatile markets undermine revenue and outstanding regulatory probes raise the spectre of continued legal charges.

The cost of protecting Deutsche Bank’s debt against default has more than doubled this year, while the shares have dropped about 39 per cent. The shares declined 2.8 per cent to €13.44 in later Tuesday afternoon trading in Frankfurt after plunging as much as 12 per cent on Monday.

The bank’s share price drop “isn’t so much a reflection of the business model of the bank, but reflects an overall sense of insecurity in the markets,” Hans Michelbach, a senior finance committee member from chancellor Angela Merkel’s Christian Union party said.

Bundesbank president Jens Weidmann said that the “financial-market volatility we are seeing is an expression of the uncertainty, of these risks to growth” in the global economy. He declined to comment on Deutsche Bank.

Mr Schauble took Deutsche Bank co-CEO Juergen Fitschen to task in December 2013 over the need for governments to keep a vigilant watch on banks. Mr Fitschen was “factually wrong” and his tone of voice was “inappropriate” when he labelled Schauble’s calls for scrutiny “irresponsible,” the minister said at the time. – Bloomberg