Quinns ready for next scene in legal saga 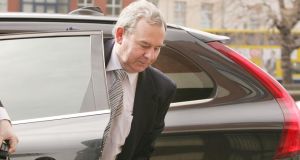 Seán Quinn snr at the Four Courts earlier this year. His family is engaged in a marathon legal battle with the former Anglo Irish Bank. Photograph: Alan Betson

Another round of the marathon legal battle between the family of bankrupt former billionaire Sean Quinn and State-owned Irish Bank Resolution Corporation kicks off next month, with a crucial application by the family to “ring-fence” all the assets in the entire Quinn group.

The litigation is now well into its third year, is likely to run for at least another two, and has ratcheted up legal costs conservatively estimated at about €30 million so far.

The non-legal costs bill will be much higher if it includes a $137 million (€101 million) sum the Quinns claim IBRC has agreed to pay to a Russian assets recovery specialist firm.

IBRC special liquidator Kieran Wallace has said in affidavits in previous hearings that IBRC has had little success to date in recovering assets in the family’s international property group.

Conspiracy case
The first of the two central cases – known as the “conspiracy case” – is the action initiated by IBRC in 2011 against some members of the family, a number of companies and others alleging a conspiracy to place assets in the Quinn international property group (with an estimated value of €460 million) beyond the bank’s reach.

The second case, known as the “main case”, is by Patricia Quinn and her five children against IBRC. Also brought in 2011, it involves claims they are not liable for €2.34 billion in loans advanced by Anglo to Quinn companies in 2007 and 2008 on the grounds that those loans were made for the unlawful purpose of propping up the bank’s plummeting share price.

Within the next few weeks, the Quinns are also expected to formally lodge proceedings alleging that the Central Bank and the Department of Finance were aware of and facilitated the allegedly illegal actions of Anglo.

IBRC previously indicated it could not object to “similar fact” issues raised in the claims against it and the regulators being heard together.

A key pre-trial application in the main case is fixed for hearing on October 16th, when the Quinns will seek orders to “ring-fence” all the assets in the Quinn group until their action against IBRC is decided.

The Quinns say the ring-fencing move, strongly opposed by Mr Wallace, was prompted by the announcement by Minister for Finance Michael Noonan that the disposal/transfer of IBRC assets is to be completed by the end of this year.

The Quinns claim assets of which they are the true owners are included in the IBRC assets. The Quinn assets were valued by the former Anglo Irish Bank at about €5 billion in 2007 and IBRC has no legitimate claim to them, the family allege.

Group restructures
They also claim the Quinn Group has been restructured in such a way as to prevent them recovering the assets should they win their action against the bank.

They say the assets include the IBIS Hotel in Prague, recently sold for €11.5 million, and want those and any other proceeds from the sale of assets ring-fenced.

Mr Wallace disputes the Quinns’ claims they are the beneficial owners of the assets and that IBRC has no valid claim to them. He also argues the assets have no real value as a result of third-party debts of the relevant companies to banks and bondholders.

The Quinns say the ring-fencing orders are necessary to ensure, should they win the main action, that they will recover cash and assets which they insist are rightfully theirs. They argue Mr Wallace is not entitled to dilute the value of the assets until the main case is heard and decided.

No full hearing is expected to open until well into 2014 at the earliest, while a final outcome could take a number of years.

If the Quinns succeed in the ring-fencing application, that will stymie IBRC’s hopes of selling off properties in several countries, while Mr Wallace, who previously confirmed IBRC is insolvent, may also have to lodge further monies into court on its behalf.

While IBRC continues to have the benefit of injunctions restraining several Quinn family members reducing their assets below €50 million after the High Court last month refused the family’s application to lift those orders, the court did require Mr Wallace to lodge €5 million in court by the end of August to meet claims should the Quinns ultimately defeat the conspiracy case.

Supreme Court appeal
Mr Wallace previously said IBRC would ensure €50 million was “ring-fenced” in the liquidation to meet claims in the event of the Quinns succeeding in the main case.

Separately, submissions have to be filed by late October for IBRC’s Supreme Court appeal against the High Court’s refusal to prevent the Quinns pursuing their claims that €2.34 billion Anglo loans were made in breach of Market Abuse Regulations and Section 60 of the Companies Act, which prevents financial institutions lending to support their own shares. A date for that appeal has yet to be fixed.

In summer 2012, Seán Quinn jnr was jailed for three months after a High Court judge found he, his father and his cousin Peter Darragh Quinn acted in breach of injunctions, restraining them stripping assets worth millions from the family’s international property group.

His father also served a period of weeks in jail over Christmas 2012. Seán jnr later agreed to sell his Dublin home in a bid to purge his contempt.

A warrant remains extant for the arrest of Peter Darragh Quinn to serve three months for contempt because he has stayed at his home in Northern Ireland.

1 Aldi empire wracked by family feud
2 Ulster Bank CEO tells staff ‘all options’ on future on the table
3 Cliff Taylor: What permanently low interest rates mean for you as a saver or borrower
4 NatWest considers closing Ulster Bank in the Republic
5 Dublin-based Fenergo considers $1.5bn listing
6 Mark Paul: Government faces dilemma on which businesses to save
7 BDO and Fexco launch new customs service ahead of Brexit
8 How Ireland managed to green the White House
9 TikTok weighs plan for up to 5,000 workers in Dublin offices
10 Gabriel Makhlouf: ‘A full second lockdown would be very serious for the economy’
Real news has value SUBSCRIBE