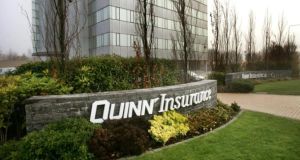 The Grant Thornton administrators, who launched the lawsuit against PwC in 2012 for allegedly failing to spot a black hole in Quinn’s finances, say they have answered all they can of PwC’s questions. Photograph: Matt Kavanagh

The €1 billion negligence action being taken against PricewaterhouseCoopers over its auditing of Quinn Insurance is “poised on a cliff of unmanageability” due to its enormous scale, PwC counsel Dermot Gleeson has claimed.

PwC has this week asked the High Court to order Michael McAteer and Paul McCann, the joint administrators parachuted in by regulators in 2010 to seize the effectively insolvent Quinn Insurance, to provide it with more details of their negligence claim.

PwC has told the court it needs the information to mount a proper defence to the case, which is one of the largest damages claims in the history of the State.

The Grant Thornton administrators, who launched the lawsuit against PwC in 2012 for allegedly failing to spot a black hole in Quinn’s finances, say they have already answered all they can of PwC’s questions.

Mr Gleeson on Wednesday claimed the focus of the case was being lost behind a “fog of generalities” due to the alleged paucity of details supplied to PwC so far. He said that if PwC’s requested order was granted, it would narrow a discovery process that could take in up to 40 million documents.

If PwC’s questions were answered, he said, “the case will be less mired . . . than it inevitably will be”. If it goes to a full trial, the case is not expected to result in a verdict until 2017, five years after it begun.

Paul Gallagher, for the administrators, said there was “no evidence” the information being sought by PwC was critical for its defence. He said it was “a difficult case for everybody”, but the administrators had answered all they could.

The administrators are suing PwC for allegedly failing in the boom years to flag cross guarantees provided by the insurance company to the wider Quinn industrial group, reducing its free assets and effectively rendering it insolvent.

PwC has denied all claims against it and said last night the “vague claims” were “devoid of merit and unjustified”.

Tony Weldon, auditing partner at PwC, told the court it wants the administrators to give more information about the under-provisioning, a breakdown of underwriting losses, and details of claims listed as closed but which since had to be reopened.

He said the details were needed to instruct expert witnesses.

Mr McAteer told the court the administrators “cannot indefinitely continue to answer” PwC’s requests, which were “overstating” problems and delaying the case. He also said he would have more accurate figures on alleged losses when the sale price of Quinn’s Irish business to Liberty “crystallises” later this year.

Mr McAteer has previously said if the administrators win, the compensation could be used to defray a 2 per cent levy imposed on all non-life policies in the State, brought in to cover losses to taxpayers on the Quinn collapse.