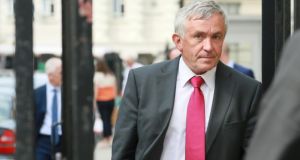 Cork property developer Michael O’Flynn, who heads the O’Flynn construction group, said he had anticipated some request from Nama to adapt the business plan to meet its requirements but this never happened. Photograph: Collins Courts

One of the National Management Agency’s biggest debtors has told the Oireachtas Banking Inquiry the agency rejected a 2,000-page business plan for his construction group “without explanation or discussion”.

Cork property developer Michael O’Flynn, who heads the O’Flynn construction group, said he had anticipated some request from Nama to adapt the business plan to meet its requirements but this never happened.

“To this day, we have not been privy to to the report provided to Nama by the external reviewer appointed [by the agency]to the O’Flynn Group,” he said.

Mr O’Flynn said that at the time of the business plan being drafted his company’s assets were generating annual rent of €72.5 million with debt of €815 million attaching.

He said developers had “no real option” but to accept Nama’s plan for their businesses or suffer the consequences.

The O’Flynn Group was one of Nama’s 10 biggest debtors and its loans were transferred from Irish banks in 2010. It is believed to have had €1.8 billion worth of face value loans transferred to Nama.

These loans were sold to global investment group Blackstone for a reported €1.1 billion in 2014 and Mr O’Flynn was subsequently involved in a legal dispute with his new lender after it effectively called in his loans at short notice.

Mr O’Flynn told the committee his group generated rental income of about €300 million while in Nama.

In his 21-page opening statement, Mr O’Flynn’s said he could have achieved a better return for taxpayers than Nama did by selling his loans to Blackstone.

“Given time, we would have worked through our loan portfolio, which would have resulted in a much better outcome for the O’Flynn Group itself, for the Irish taxpayer, for the Irish banks, and the economy in general,” he said.

“Nama failed to distinguish between good loans and bad loans, and between professional developers and amateur developers. I have argued this consistently since Nama was set up and I passionately believe that the outcome could have been much better for all if a different approach had been adopted.”

Mr O’Flynn said he was “treated very badly” by Nama in spite of co-operating fully with the agency and “at no stage” seeking to put any assets beyond the reach of Nama.

“I have encountered some very decent, professional and fair minded people who worked in Nama,” he said. “However, I have also had some very poor experiences.”

He said the only oversight a borrower could seek in Nama was by way of a judicial review. “Not only does the expense of such an application put it beyond the reach of most borrowers but any such application is certain to be regarded by Nama as uncooperative and …would be the end of that borrower in Nama.”

Mr O’Flynn’s company loans were restructured in February 2013 and were “fully performing”. In spite of this, when Nama came to sell the loans they refused to allow the group to have any discussions with potential bidders, under its section 172 policy.

“If any bidder had an association with us, even if the result would have been a higher bid and a better return for the State, they were to be excluded automatically,” Mr O’Flynn told the committee. “There is no sound commercial basis for such a policy and it is one which may well have led to financial losses for the State.”

Mr O’Flynn told the committee that between 2006 and 2008, when the property market crashed, the O’Flynn Group had average cash balances of €76 million. He said that while group companies sometimes provided cross guarantees on borrowings he never provided any form of a personal guarantee to banks.

In spite of this, his personal loans and those of his brother John, who co-founded the group, were also transferred to Nama.

O’Flynn Construction was founded in 1978 by the O’Flynn brothers. At its peak in the mid 2000s, it employed about 1,000 people and it developed projects in Ireland, the UK, Estonia, Germany and Spain.

It later set up other companies - Victoria Hall, Tiger Developments and Shelbourne Senior Living - which were combined to form the O’Flynn Group in 2006.

It had borrowings with most of the banks in Ireland, with Anglo Irish Bank being a key lender. Mr O’Flynn said there was “no semblance of a cosy relationship” with any of the banks.

“Overall, I believe the establishment of Nama and the way in which it operates has actually delayed and hampered the return to economic growth in Ireland,” Mr O’Flynn said.