Controversial ceiling of €100,000 on most deposits comes into force 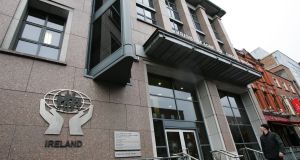 The rules are intended to ensure the funding of a credit union is sufficiently diversified and is not reliant on a small number of members. Photograph: Frank Millar/The Irish Times

A controversial new rule limiting deposits in credit unions to €100,000 has been brought into force by Minister for Finance Michael Noonan.

However, in a concession to credit unions, the rules are to be reviewed by a committee that advises the Government on credit union policy. It will report in six months.

Credit unions and their members will be given time to adjust to the new regime and some exceptions are to be allowed.

The Minister signed the commencement order on the new rules just before Christmas and they are due to come into force on January 1st. The major credit union representative bodies are expected to consider what attitude to take in the light of new concessions in meeting to be held early in the new year.

Sources say the credit union movement will continue to oppose the new plans and is likely to seek to make regulation of the sector an issue in the general election campaign.

Following intense lobbying by the credit unions, it was first announced that credit unions would be able to apply to hold on to existing deposits over €100,000. The Central Bank had also indicated it would review the rules within three years.

However, following discussions, it has been agreed that the new rules will be reviewed over the next six months by the Credit Union Advisory Committee, a statutory committee established last year to advise the Minister for Finance on credit union matters.

Also, in addition to credit unions being able to apply to hold existing large deposits, applications will also be considered from bigger credit unions seeking to attract new deposits over the limit. Credit unions have already been briefed on the application process to hold on to existing deposits and, according to a recent answer to a parliamentary question by Mr Noonan, will be asked to apply within the first quarter of 2016 if they wish to do so, with the Registrar of Credit Unions due to reply by the end of the second quarter.

As such credit unions and savers will be given time to adjust to the new rules.

Despite these concessions, sources say the credit union movement will fight the new plan and will seek to make regulation an issue in the general election.

In its recent annual financial report, Ed Farrell, the chief executive of the Irish League of Credit Unions said: “Credit unions want to evolve and change but are increasingly frustrated at the regulatory roadblocks put in our path. These roadblocks threaten the ability of credit unions to continue to serve in communities throughout the country in the future.”

She told a recent Oireachtas committee hearing, “We have not seen enough from credit unions by way of well-structured, viable and sustainable plans for development which also deal with the current operational and financial challenges that have to be dealt with to move forward successfully.”

The registrar has been trying to push a restructuring agenda.

1 In this strangest of recessions, what happens next for Ireland?
2 Michael O’Leary is the boss you want to lead an airline out of crisis
3 ‘Self-made’ Trump was given $413m in today’s money by father
4 LittleBig bike: Cycling solution revolves around children’s growing needs
5 Ocean says it has finished trials on power-generating prototype
6 Tánaiste urges businesses to brace for Brexit with 100 days to go
7 Estée Lauder staff at Dublin airport plan further strike action
8 Permanent TSB faces second senior management vacancy
9 The iceberg theory of work-related accidents
10 Monex directors share €6.3m dividend as profits and revenues up
Real news has value SUBSCRIBE