It was the worst day of my life, Brian Goggin tells bank inquiry 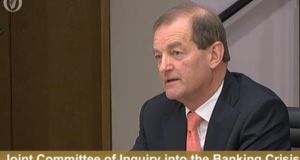 Former Bank of Ireland chief executive Brian Goggin during today’s sitting of the Joint Committee of Inquiry into the Banking Crisis.

The former chief executive of Bank of Ireland Brian Goggin has told the Oireachtas banking inquiry that the day of the bank guarantee in September 2008 was the worst day of his life.

Mr Goggin has also told the inquiry, that is examining the collapse of the Irish banking system, that the then taoiseach Brian Cowen was “very much in charge” on the night.

“The entire day and the night of the 29th of September was the worst day of my life,” Mr Goggin, who was CEO of the bank for five years until his retirement in 2009, told the inquiry. “The pressure, the stress, the issues I was trying to deal with, it was incredibly stressful and traumatic. As it was for government members and officials.”

He told the hearing that Bank of Ireland would not have needed a bank guarantee on the night of September 29th, 2008 were it not for the fact that Anglo Irish Bank was set to collapse.

“Absent Anglo Irish Bank’s collapse, Bank of Ireland would not have needed a guarantee,” he said. He described Anglo’s position at the time as “perilous”.

Bank of Ireland was also asked to acquire Irish Life & Permanent on the day of the guarantee decision by the Government, Mr Goggin said.

In a statement furnished to the inquiry, Mr Goggins said the request was made by the Central Bank of Ireland. “We were asked to consider a scenario whereby Bank of Ireland would consider acquiring IL&P.”

He also said Anglo Irish Bank asked Bank of Ireland to acquire the troubled institution on the same day, a request that was turned down.

Later that evening, Bank of Ireland and AIB were asked to contribute €5 billion each in liquidity to Anglo to help keep it afloat.

He has no doubt that the Government’s guarantee decision “believing it was the appropriate decision”.

But Mr Goggin said the Government was “not minded to intervene at all” in the early part of the guarantee night.

On Bank of Ireland’s State bailout, Mr Goggin said:”I regret that State assistance was required. I’m very sorry this happened on my watch.”

He said all his decisions as CEO, “good or bad”, were made “in a considered fashion and in good faith”. He also “deeply regretted” losses incurred by shareholders of Bank of Ireland.

Bank of Ireland was a “pretty conservative bank” but it still got caught, Mr Goggin said. He said: “It is very easy to be wise with hindsight.”

Under questioning from Fianna Fail’s Michael McGrath, Mr Goggin accepted that Bank of Ireland had taken too much risk in the years leading up to the crash in late 2008.

Mr Goggin, who was chief executive from 2004-2009, said on 29th of September he was “put on notice that Anglo Irish Bank was going to default the next day”.

He said this was a “grave piece of news to receive” and he knew “something catastrophic’ was about to happen.

Mr Goggin said he had been asked earlier in the day to consider taking over Irish Life and Permanent in the scenario where Irish Nationwide and Anglo were to fall.

The former BOI chief said he had a conversation with the former Central Bank Governor in the summer of 2008 when he was told there was “lobbying for a system-wide guarantee for all the banks”.

He said: “It was mentioned it to me in conversation, he sought my view. My direct view was that Bank of Ireland did not need a guarantee.”

Mr Goggin said the the then Central Bank Governor expressed concern about nationalising to banks on the night of the guarantee, At 2am, Bank of Ireland and Allied Irish Bank told the Government it could provide €10 billion to Anglo Irish Bank. He said the mood changed and there was a capital sense of relief that the default of Anglo had been prevented.

Mr Goggin told the inquiry: “At that juncture it is my recollection is that we were informed a blanket guarantee was being provided. “When I left at 3.30 am, there was no ambiguity about what was being done on that night. A blanket guarantee.” On the night, Mr Goggin said the Taoiseach Brian Cowen was “very much in charge”.

The former chief executive, who earned up to €4 million, admitted he was paid “exceptionally well” but said all of his remuneration was decided by the board. He said he had no input or involvement in that decision.

Mr Goggin said he felt a responsibility to request a meeting with the Government about the gravity of what was approaching.

Mr Goggin declined to tell the inquiry how much of a pension he is receiving from the institution. He said it was not for him to determine whether the salary was warranted or merited.

The former chief executive was questioned by Fine Gael’s Kieran O’Donnell about a possible draft guarantee being produced on the night of the guarantee. Mr O’Donnell said the committee had received minutes suggesting BOI and AIB had brought a draft document to Government yet witnesses have said there was none.

The Fine Gael TD said the inquiry was “contradictory evidence” being given. Mr Goggin said he has “no recollection of it” and had made several queries to try find out whether one existed to no avail.

On the night of September 30th, Mr Goggin said Bank of Ireland was “absolutely” solvent. He said that night was a “fraught occasion” because of the circumstances they were in. Brian Cowen was chairing the meeting and was “very much in charge” while then Minister for Finance Brian Lenihan carried out most of the interaction.

Mr Goggin said Mr Lenihan was looking for views and input from the banks on the decision. Mr Goggin said BOI was totally opposed to 100 per cent mortgages and he told the then Financial Regulator his concerns in mid 2006. He said in hindsight it should never have entered that market.

Mr Goggin said he was not party to the decision and has no idea what other option they had. He said the Government was in a dreadful predicament and claims hey didn’t have much of an alternative option.

Under questioning from Pearse Doherty, Mr Goggin said it was his recollection that AIB was in the room when they were told of the blanket bank guarantee. AIB had told the committee they became aware of the decision through the media the next morning.

Mr Goggin said he met two officials from Anglo Irish Bank at 2.30pm on the 29th of September.

He said: “We agreed to meeting as a matter of courtesy. Both the chairman and chief executive came to Bank of Ireland Baggot Street for that meeting.

“The chairman mentioned they had a liability maturing in amount of €1.5 billion or €2 billion - something of that magnitude and they were unable to honour that commitment.

“They asked Bank of Ireland to acquire Anglo. We told them we had no interest. We politely told them we couldn’t be of any assistance.”

Fianna Fáil’s Michael McGrath asked Mr Goggin to reflect on his decision not to reveal his pension.

He said it had been widely reported that it was in the region of €650,000 but Mr Goggin declined.

The former executive said he was never asked to take a reduction in his pension and he never did.

1 Period of ‘extreme stress’ beckons for Irish businesses
2 Ireland is in danger of losing the woods for the trees on emissions reduction
3 Irish company to test vaccines on volunteers deliberately infected with Covid-19
4 FinCEN Files: Dublin-listed fund sent $23m to firm suspected of links to Russian crime boss
5 Covid-19 crisis appears to strengthen French resolve for EU fiscal harmonisation
6 Dunnes Stores set to enter grocery delivery market
7 Coronavirus response must not kill the futures of Ireland’s young
8 Extreme stress warning, French resolve and woods for the trees
9 FinCEN Files: Scale of challenge facing financial regulators revealed in leaked documents
10 The wealth of the Irish – how do your assets match up?
Real news has value SUBSCRIBE