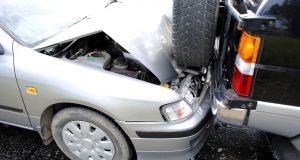 Injury claims have surged in recent years, forcing Irish-regulated companies to bolster their reserves by tens of millions of euros

The largest Gibraltar-based insurer offering Irish motor coverage is accelerating its retreat from the loss-making market, in a move seen as adding more pressure on already-soaring rates.

Zenith Insurance, which is understood to have built up to a 5 per cent stake in the Irish motor insurance market, moved two months ago to stop writing motor insurance through one of four Irish underwriting agencies through which it had been carrying out business.

Industry sources said on Tuesday that Zenith, thought to have developed an Irish business with up to €50 million in premiums by offering among the most competitive rates in a troubled market, has decided to withdraw more capacity in this country.

Gary Humphreys, group underwriting director for the UK-based Markerstudy Group, which owns Zenith, said: “We continually monitor performance and rates in all areas of our business and respond accordingly. We are not completely withdrawing from the Irish market.”

Underwriting agencies operate between brokers and insurance companies, which ultimately take the risk for policies. Markerstudy declined to comment further.

Less than five weeks ago, another Gibraltar-based company, Enterprise Insurance, collapsed and declared itself “hopelessly insolvent”, sparking uncertainty about how 255 Irish claims on its books, with an estimated cost of €6.2 million, will be met.

The latest move by Zenith, owned by a strong parent in Markerstudy, is a proactive and strategic one in light of the state of the Irish market and the company will continue to carry out some business here, say sources. All existing Zenith policies will be honoured.

The problem for Irish customers of Enterprise Insurance following its collapse is that Gibraltar does not have an insurance compensation fund and Ireland’s regime is in a legal quagmire. The Motor Insurance Bureau of Ireland, an industry body that deals with claims against uninsured drivers, is appealing High Court and Court of Appeals rulings that it foot the €90 million bill from the collapse of Malta-based Setanta Insurance in 2014.

It was initially expected that the State-run Insurance Compensation Fund would cover up to 65 per cent of Setanta’s outstanding claims, up to a limit of €825,000 per case.

Zenith stopped writing business in June through ARB Underwriting, an insurance underwriting agency in Dublin. ARB said at the time that Zenith cited Ireland’s difficult market, courts system and unhappiness with how the industry had been left with the cost of Setanta’s collapse as the main reasons.

Executives from the other three Irish agencies that Zenith uses to arrange and administer insurance business for it – Footprint Underwriting, Bump Insurance and Prestige Underwriting Services – did not respond to attempts to contact them on Tuesday.