Two-thirds of companies plan to cut costs in next 12 months, survey shows 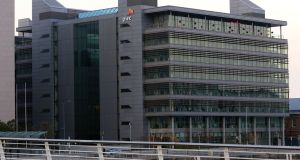 PwC offices in Dublin: the company’s survey found that among the biggest fears of worried bank bosses were over-regulation, speed of technological change and geopolitical uncertainty. Photograph: Nick Bradshaw

Bank chief executives are becoming increasingly worried about the prospects for global growth, tightening regulations and the impact of cybercrime on their operations, according to a study by PricewaterhouseCoopers (PwC).

Banks are also planning significant changes to the way they manage risk, while the speed of technological change remains one of the biggest issues facing banks, according to the response of industry leaders to PwC’s annual CEO survey.

The survey of 176 global banking leaders found 71 per cent see more threats to growth today than three years ago. Only 31 per cent of banking and capital market chiefs believe global growth will improve over the next 12 months, down from 43 per cent last year.

“Faltering economic confidence is heightened by concerns over social and political instability,” said the report. More than three-quarters of bank leaders see geopolitical uncertainty as a threat to growth and nearly 70 per cent expressed fears over social instability.

Three-quarters of banking chief executives see cyber threats as a barrier to growth, said the report, and banks “are only as strong as the weakest link” as the financial system fights against cyber crime.

There is also an acute shortage of staff who have both banking and digital skills, according to the industry.

“The pressures of economic conditions, regulation, costs, risk management and increasingly cyber remain. Getting this right now though has never been more crucial for the sector. As one of the CEOs we surveyed noted, the world needs banking but not banks.”

10 Eirgrid proposals to include €2bn power line around Irish coast