Billionaire must not be allowed ‘set the boundaries’ for media 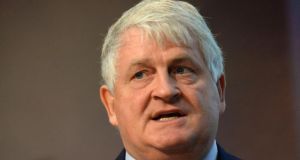 The injunction case taken by businessman Denis O’Brien and IBRC to prevent an RTÉ story about his dealings with the State-owned bank will wrap up on Friday, following three days of intense argument in the High Court over the freedom of the media to report certain aspects of Mr O’Brien’s financial affairs.

Mr Justice Donald Binchy, who is hearing an initial application for a temporary order muzzling RTÉ until a full trial, will hear the concluding arguments of lawyers for Mr O’Brien and IBRC on Friday morning.

The judge is likely to reserve his judgment following final submissions, so it is unclear if the broadcaster will know whether or not it can transmit the story before the weekend.

Lawyers for the broadcaster on Thursday told the court it should ignore a “threat” from the businessman to “review his arrangements” with all Irish banks if he loses the case. The billionaire “should find some other horses to frighten”, said David Holland SC, representing RTÉ.

“No sovereign State or court should put up with that kind of threat,” said Mr Holland.

He also summarised to the court the proposed script of the RTÉ news report that is the subject of the case, although journalists were warned on several occasions by the barrister and the judge not to report its contents.

Vast chunks of Thursday’s proceedings cannot be reported due to restrictions imposed on the media following an application by Mr O’Brien.

The restrictions cover any detailed references to the contents of a 2013 letter written by Mr O’Brien to the liquidator of IBRC, Kieran Wallace.

The letter partly forms the the basis for the RTÉ story Mr O’Brien is trying to prevent, because he says it will breach his privacy and damage his interests.

It can be reported that the letter referred to a “request” from Mr O’Brien to extend his loans with IBRC, and that it also outlined the level of his debts and addressed “the speed” of his repayments.

Earlier on Thursday, Mr Holland told the court Mr O’Brien wanted the “lifeblood sucked out of the story”.

There would be no point in RTÉ broadcasting a report without naming Mr O’Brien, he argued. The businessman wanted a “boring, dry, sterlie” report, said the barrister.

Mr Holland said freedom of the press is the lifeblood of democracy and for that to happen the blood “must actually flow”.

He argued that Mr O’Brien chose to reveal certain details about himself to the public through the websites of some of his companies.

This included details of his philanthropic activities and an assertion on one website that he is “one of Ireland’s leading entrepreneurs”.

“He chooses to tell the public these things about himself,” said Mr Holland. “By doing so, he becomes a public man . . . He is not entitled to set the boundaries” about what can be reported, he argued.

In order to restrain RTÉ from reporting prior to a full trial, said Mr Holland, the court must “be satisfied that this is a truly exceptional circumstance and that it is clear no defence will succeed at trial”.