Chartered accountants coining it in as salaries jump 9%

New survey shows salaries continuing to rise with average rising to more than €100,000 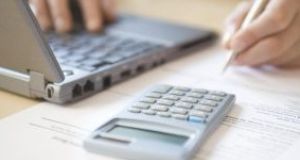 Chartered accountants continue to reap financial rewards from the recovery with average salaries rising 9 per cent last year to €109,756, according to a new study.

This comes on top of a 13 per cent rise a year earlier.

A new survey of 1,100 Chartered Accountants of Ireland members based in the Leinster region shows that those working in the profession are well rewarded for their work. Indeed, 75 per cent of accountants surveyed said they had seen their salary increase by at least 10 per cent over the last three years.

Just 6 per cent of accountants surveyed reported a decline in salary over the same period, while 26 per cent of respondents said their salaries had risen by more than 25 per cent.

As well as rising salaries, the report reveals a healthy level of career progression within the profession, with 41 per cent of those surveyed having been promoted in the last three years. This was down slightly from 49 per cent for the same period in 2015 but is still higher than in many other professions.

Just 2 per cent of survey respondents were unemployed at the time the survey was undertaken. Not surprisingly, the vast majority of chartered accountants said they were optimistic about their future prospects with 88 per cent stating they found the jobs market to be positive.

The survey found that just 24 per cent of respondents worked in accountancy practices with the vast majority working either in financial services or industry.

Commenting on the findings, Shane McAleer, chairman of Chartered Accountants Leinster Society said there were considerable rewards and career progression opportunities for those choosing a career in the profession.

“At the younger end of the profession, we are seeing strong demand for trainees and chartered accountancy remains the largest employer of new graduates in Ireland,” he said.

“We are seeing more training vacancies available in businesses and practices across Ireland for graduates of all backgrounds, and greater flexibility for those who are interested in training to become a chartered accountant,” Mr McAleer added.