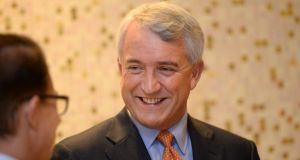 AIB chief executive David Duffy: Cantillon wonders if he would agree with Anne Boden’s assertions about her former role at the bank?

Having quietly taken her leave of AIB as chief operating officer last December, Anne Boden is busily preparing for the launch next year of her new UK digital retail bank, called Starling.

“The music industry has been transformed by iTunes, retailing by Amazon, but banking hasn’t changed its approach in a long time,” Boden told delegates. “The same simple services traditionally offered in branches have just moved online and into apps. Empowered, tech-savvy consumers want and deserve more from their banks, they want easy, intelligent banking, not just mobile versions of paper statements.”

“Most customers aren’t switching because they see little difference between the big banks that all offer the same old-fashioned services.” Boden said.

“But now UK regulators have changed the rules to enable new entrants to compete. Finally, the technology behind all the best internet platforms can be brought to banking, allowing us to create a digital banking service that’s truly

personal to each customer.”

Starling will “resemble Google, Facebook and Amazon more than Barclays, HSBC or Lloyds [or AIB presumably],” she said.

According to UK native Boden’s own PR, at AIB she was responsible for the “cost base of the bank, including technology, operations and digital, and oversaw the introduction of technologies which transformed the customer experience and returned the bank to profitability”.

That’s a big claim. Cantillon wonders if AIB chief executive David Duffy would agree with each of those assertions?

1 Owner of Dundrum Town Centre to sell prized assets
2 Pilita Clark: Working from home is starting to pall
3 Thousands back petition demanding State aid for Aer Lingus
4 Over half of Ireland’s businesses in decline following Covid-19 lockdowns
5 Can a first-time buyer get relief on a buy-to-let home?
6 Law governing construction pay rates remains pending State appeal
7 Seán Quinn children demand share of lost business
8 Microsoft to press on with TikTok deal talks after call with Trump
9 Grafton Street: can it recover from the short, sharp shock of Covid-19?
10 Ryanair fails to win injunction against Skyscanner
Real news has value SUBSCRIBE