BNP Paribas close to deal over US sanctions

French bank likely to pay up to €6.6bn to settle 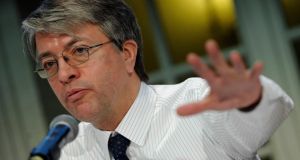 Jean-Laurent Bonnafe, chief executive officer of BNP Paribas. The bank is said to be close to an agreement to settle claims it violated US sanctions. Photograph: Fabrice Dimier/Bloomberg

BNP Paribas is close to an agreement to plead guilty and pay $8 billion to $9 billion (€5.9 billion to €6.6 billion) to settle allegations it violated US sanctions, according to a person familiar with the negotiations.

The French bank intentionally hid transactions amounting to about $30 billion that violated US sanctions against countries including Iran and Sudan, said the person, who asked not to be identified because the discussions are confidential.

BNP Paribas will probably plead guilty in early July to a criminal charge of conspiring to violate the International Emergency Economic Powers Act, the person said.

The bank would be temporarily banned from handling transactions in dollars and would announce departures of more than 30 employees, many of whom already have left. – (Bloomberg)

1 Belgium helps Ireland to a Brexit boon
2 ‘My rent here is so low it’s a joke’
3 Can Grafton Street stop the flood of closures?
4 New Powerscourt Springs hotel to open in defiance of virus gloom
5 This charming man: how Paschal Donohoe won the Eurogroup presidency
6 Pharmaceutical industry signals it won’t extend drugs agreement
7 Goodbody’s planned €155m sale to Bank of China falls through
8 Goodbody loses a second suitor as Bank of China deal falls through
9 ‘Sad day’ for House of Ireland as tourism retailer goes out of business
10 Bank of Ireland launches €200,000 prize fund
Real news has value SUBSCRIBE