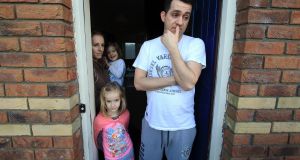 Martin Maloinowsk is among the familes facing notice to quit their homes in Tyrrelstown. Photograph: Nick Bradshaw/PA

The Tyrrelstown residents appear to be facing eviction from their homes as a result of an agreement to sell them reached by the developers and landlord on one side, and on the other by Beltany Property Finance, which bought the loans on the properties from Ulster Bank.

While Beltany is virtually unknown to the public, it is an affiliate of an altogether more ubiquitous beast: Goldman Sachs, infamously known as the “vampire squid” of international finance.

Goldman earned this derogatory title from Rolling Stone magazine for its extraordinary ability to suck value for itself out of deals. The firm has bought several large portfolios of Irish property loans from banks in recent years. Most of the deals were consummated using Beltany.

Its accounts show it has paid Irish banks more than €700 million for loans since the middle of 2014. Beltany has filed accounts only for the last eight months of 2014 during which it was incorporated, but they clearly demonstrate the tax-efficiency of its design.

It generated income in those eight months of €44 million. Beltany is financed, however, by complicated loan notes issued by another tentacle of the Goldman empire, the costs of which ensure its taxable profits are minimised.

Beltany has bought €313 million of mainly commercial property loans from IBRC, its accounts show, €232 million from Ulster Bank and €171 million from Danske Bank. Some high-profile borrowers, such as Galway builder Padraic Rhatigan, escaped its clutches through refinancing deals.

The Tyrellstown residents, however, are unlikely to have such a happy ending.