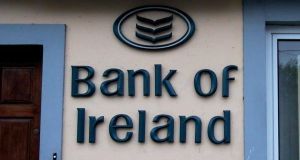 Bank of Ireland made a pre-tax profit of €921 million, according to full-year results published on Friday. This was an improvement of €1.5 billion on the previous year and marked its first annual profit since the financial sector here crashed in 2008.

The bank had made a loss of €564 million in 2013. It said all divisions of the bank are now profitable and its total income rose last year by €300 million. Its net interest margin rose to 2.11 per cent from 1.84 per cent while its cost-income ratio declined by five points to 55 per cent. Its total costs were broadly flat.

The bank said it completed €10 billion in new lending last year, an increase of more than 50 per cent. Its defaulted loans reduced by €2.8 billion to €14.3 billion, some 22 per cent below the peak.

In Ireland, excluding its Irish tracker mortgages (which reduced by €1.5 billion), total new lending of €5.7 billion exceeded repayments and redemptions. “We were the largest lender to the Irish economy during 2014,” the bank said.

Overall, net loans and advances to customers were €82.1 billion at the end of December, a net reduction of €2.4 billion on a year earlier.

Redemptions, repayments and loan sales across the group totalled about €14 billion last year.

“Our actions to reduce defaulted loans, repayments in our Republic of Ireland mortgage tracker book and the rundown of our non-core GB business banking/corporate banking books, together accounted for more than €3 billion of this figure,” its chief executive Richie Boucher said in his review of the business.

In terms of its mortgage arrears customers, Bank of Ireland said that more than 90 per cent of its owner-occupiers with restructuring arrangements are meeting their repayments. A similar figure applies for its business banking borrowers.

“Our defaulted loan volumes continued to fall - by €2.8 billion in 2014 and by €4 billion from their reported peak in June 2013,” Mr Boucher said. “We anticipate further reductions in defaulted loans in 2015 and beyond with the pace being influenced by a range of factors.”

Mr Boucher said 2015 saw a mortgage provision reversal in the Republic of €280 million.

Customer loan impairment charges were reduced across all asset categories. Excluding the mortgage provision reversal, the impairment charge would have reduced to 90 basis points during 2014. “We expect this charge to continue to progress toward normalised levels,” Mr Boucher said.

He told RTE on Friday that BOI did about 200 house repossessions last year.

Mr Boucher was yesterday sent notification by the Oireachtas Banking Inquiry that it wants him to appear in early May to give testimony Bank of Ireland’s role in the financial collapse.

On the banking inquiry, Mr Boucher told RTE that the focus would likely be on his role in the bank prior to him taking over as chief executive six years ago.