Bank achieves a substantial reduction in impaired loans to €13.1bn, down €9.1bn 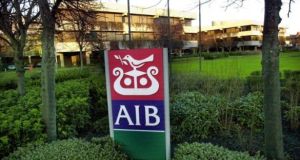 AIB made a pretax profit of €1.9 billion in 2015, according to accounts just published. This represented an increase of 72 per cent on the previous year and was driven by “high quality new lending”, the bank said.

This profit figure allowed for exceptional items of €296 million, which included restitution, restructuring and voluntary severance.

Its pre-provision operating profit was 18 per cent higher at €1.3 billion. The bank achieved a substantial reduction in impaired loans to €13.1 billion, down €9.1 billion from December 2014.

The bank, which is 99.8 per cent owned by the State, said new lending approvals amounted to €14.4 billion last year.

This involved €8.7 billion of drawdowns, a year-on-year increase of 49 per cent.

Its total operating income rose by 4 per cent to €2.6 billion while its net interest margin, a key measure of profitability, increased to 1.97 per cent from 1.69 per cent in 2014.

AIB had a cost-income ratio of 49 per cent as operating expenses declined by 8 per cent or €107 million.

The bank also said it was “well positioned” to repay the full €20.8 billion it received in State bailout funds post the 2008 global financial crash.

“There can be no doubt that the group’s financial performance has confirmed our transition from a work-in-progress to a fully-functioning sustainable well-capitalised bank.

“This bank is now well positioned to enable the State to recover its full investment of €20.8 billion.

“Our strong profitability, significant increased lending, material reductions in impaired loans, normalised capital structure and significant payments to the State made 2015 a milestone year for AIB.”