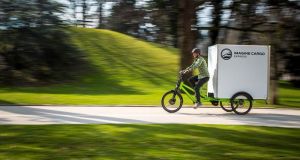 IBack to the future: ‘The Austrian system is more than 150 years old and began with steam train and horse and cart. With our new technology . . . we can offer a better experience,’ says Nick Blake

The bicycle courier has become an indispensable part of the working day for many businesses, ferrying important documents or packages through traffic-choked city streets – without producing carbon emissions.

What would happen, Leeds man Nick Blake wondered a few years ago, if you took Europe’s high-speed train network and book-ended it with cycle couriers? With that, ImagineCargo was born.

Then in February 2014, Blake, a veteran of the logistics industry, discovered the real selling point: using bicycles instead of trucks at each end cuts carbon emissions by 99 per cent.

“That was the a-ha moment,” he says, calculating that the transport of a 5kg package across Europe using traditional carriers generates up to 12kg of CO2 emissions. “With 4.5 million packages sent in Europe each day, our model offers a megatonne-sized CO2-saving potential that puts it into a category with major changes to building regulations or power generation.”

From its base in Zürich, ImagineCargo has negotiated deals with the rail companies in Switzerland, Austria and Germany and acts as link to courier companies in all major cities served by the high-speed rail network.

Now in an early operations phase in Switzerland and Austria, it is approaching business that need packages moved around the continent quickly but who are concerned about the environmental impact.

The company’s packaging displays specific CO2-saving information, making each package a small advertisement for its reduced environmental impact, one seen by everyone who handles the package along the way.

ImagineCargo intends to be both, and is confident it is well-placed to benefit from heavy investment by European governments in their high-speed networks.

From 2017 on, for instance, the 600km Berlin-Munich train journey time will drop from almost six hours to less than four on one of Germany’s most crucial arteries.

Even now, for journeys of up to 1,000km, Mr Blake says it isn’t much quicker to messenger packages via out-of-city airports than city centre train stations – but far dirtier.

“It’s a ‘back to the future’ situation: the Austrian system is more than 150 years old and began with steam train and horse and cart,” he says. “With our new technology to manage orders and tracking information, we can offer a better experience.”

ImagineCargo joins the logistical dots but is not a service to ship anything. Instead it pitches itself as the green alternative for companies who need something somewhere fast – legal documents, medical supplies, architect models for competition – and where price is a secondary concern.

Prices vary but Blake says it will always be cheaper than the current alternative for companies up against a deadline: a taxi.

“And a messenger will place the delivery into the hands of the person, even if it means chasing them around the city,” he says.

After taking its first steps this year, into Austria and Switzerland, ImagineCargo will be making a major push into the German market in 2016 and hopes for some additional momentum from COP21 climate talks in Paris.

Aviation kerosine is tax-free, duty-free and VAT-free, he says, while trucks pay taxes and for tolls but not for noise pollution, congestion and deaths through particle pollution.

“It’s a contentious issue and we would say our competition isn’t paying their full external costs,” he said.

At the very least, he is hopeful any new climate measures agreed in Paris will oblige his competitors to make a greater cost contribution – and give a shot in the arm to his innovative bike-train-bike courier model.