Yes side takes narrow lead ahead of Greek vote 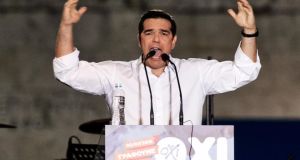 Greek voters go to the polls on Sunday in a historic referendum that could determine their country’s future in the single currency, after the state’s highest administrative court gave the green light for the referendum to go ahead.

With the latest opinion poll putting the Yes side fractionally ahead, prime minister Alexis Tsipras urged voters to reject the terms of a bailout agreement offered by creditors.

As rival protests took place last night in Athens, Mr Tsipras told No supporters at a rally in the capital’s Syntagma Square to say no “to those who terrorise you”.

“All of Europe is looking on at the Greek people. The whole world has turned its eyes to Syntagma. We are giving an opportunity for democracy to return to the birthplace of democracy,” he said.

Earlier, in a live televised address to the nation, the prime minister urged citizens to vote No to “ultimatums, divisions and fear”.

Nearby, the historic Kallimarmaro stadium was thronged for the final Yes rally, addressed by Athens mayor Yiorgos Kaminis, who ridiculed Mr Tsipras’s claims a No vote would produce a speedy deal.

Both rallies passed off peacefully, with only minor scuffles between anti-establishment protesters and riot police in front of the finance ministry. A referendum result is expected tomorrow evening, a couple of hours after polls close.

Last night’s rallies took place against a background of continuing confusion about the state of play between the two sides. Greece’s lenders denied assertions by Greek finance minister Yanis Varoufakis on RTÉ radio on Friday that a Greek bailout deal was imminent.

The head of the Greek banking association said while the banks had a liquidity buffer of €1 billion until Monday, after that they would be dependent on the European Central Bank, which is due to assess its provision of emergency funding to the banking system on Monday.