US judge orders Argentina and bondholders to agree deal 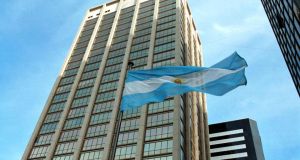 A US judge has ordered Argentina and investors who did not participate in the country’s past debt restructurings to meet “continuously” with a court-appointed mediator until a settlement is reached. Photo: Bloomberg

A US judge has ordered Argentina and investors who did not participate in the country’s past debt restructurings to meet “continuously” with a court-appointed mediator until a settlement is reached, warning of the threat of a new default.

US District Judge Thomas Griesa in New York told Argentina and lawyers for investors who declined to restructure their bonds after the country defaulted on about $100 billion in 2002 that time was running out to reach a deal and avert a fresh default.

“That is about the worst thing I can envision. I don’t want that to happen,” the judge said.

Jonathan Blackman, a lawyer for Argentina said even with around-the-clock talks, it would be “unlikely, if not impossible, to result in settlement.”

“It simply can’t be done by the end of the month,” he said.

Mr Griesa ordered the parties to meet with Daniel Pollack, a New York lawyer appointed to oversee settlement talks, “continuously until a settlement is reached.”

Argentina is sending a delegation to meet with Mr Pollack, but a government source said Economy Minister Axel Kicillof would not be among the group.

Argentina has been pushed to the brink of a fresh debt default by US court decisions that it pay $1.33 billion plus interest to bondholders who did not participate in debt swaps in 2005 and 2010. The holdouts are led by NML and Aurelius Capital Management.

The country argues paying the holdouts would open it up to as much as $15 billion in claims from other investors and further strain its financial condition.

At Tuesday’s hearing, Argentina renewed its request that the judge stay enforcement of his orders. Judge Griesa said the step was not necessary, as there are “ways to do something to avoid default.”

Bank of New York Mellon asked the judge to allow it to hold onto $539 million Argentina deposited last month for a payment to the restructured bondholders. Griesa previously ordered the sum returned, saying it violated his orders.