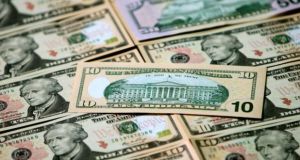 Growth in consumer spending, which accounts for more than two-thirds of US economic activity, was revised down by one-tenth of a percentage point to a 4.2 per cent pace in the fourth quarter

US economic growth braked more sharply than initially thought in the fourth quarter amid a slow pace of stock accumulation by businesses and a wider trade deficit, but the underlying fundamentals remained solid.

Gross domestic product expanded at a 2.2 per cent annual pace, revised down from the 2.6 per cent pace estimated last month, the Commerce Department said on Friday. The economy grew at a 5 per cent rate in the third quarter.

With consumer spending accelerating at its quickest pace since the first quarter of 2006 and sturdy gains in other measures of domestic demand, the slowdown in growth is likely to be temporary.

Growth in consumer spending, which accounts for more than two-thirds of US economic activity, was revised down by one-tenth of a percentage point to a 4.2 per cent pace in the fourth quarter, still the fastest since the first quarter of 2006.

Business spending on equipment was revised to show it rising at a 0.9 per cent rate instead of the previously reported 1.9 per cent contraction.

A first-quarter acceleration is now in the cards, with data on Thursday showing a rebound in business spending intentions in January after four straight months of declines.

Growth in final sales to domestic purchasers, a key measure of domestic demand, was revised to a 3.2 per cent pace from the previous 2.8 per cent rate.

The fourth-quarter growth revision was generally in line with expectations.

US Treasury prices extended losses after the data, while the US dollar trimmed earlier losses against a basket of currencies. US stock index futures were pointing to a slightly lower open.

Businesses accumulated $88.4 billion worth of inventory in the fourth quarter, far less than the $113.1 billion the government had estimated last month.

The slower pace of inventory accumulation, however, will be a boost to first-quarter GDP growth.

Despite the strong consumption, inflation pressures were muted in the fourth quarter, with the personal consumption expenditures price index falling at a 0.4 per cent rate - the weakest reading since early 2009. The PCE index was previously reported to have declined at a 0.5 per cent pace.

Excluding food and energy, prices rose at an unrevised 1.1 per cent pace, the slowest since the second quarter of 2013.

The low inflation environment suggests little urgency for the Federal Reserve to start raising interest rates from near zero, where they have been since December 2008.

Residential construction spending in the fourth quarter was revised down, while government spending was not as weak as previously reported.

1 How much state pension will I get next year?
2 Oxford Covid vaccine trials offer hope for elderly
3 Tesco takes to the skies with home delivery by drone
4 Hurrah for the companies giving staff more time off
5 Covid-19 will worsen shortage of accountants, says CPA Ireland
6 Rebuilding cost increases could leave homeowners underinsured
7 How much life insurance is enough?
8 Help, I’ve no PRSI stamps – can I still get a pension?
9 EU has helped transform living standards of Europe’s people
10 Beef farmers have real problems and they will get worse
Real news has value SUBSCRIBE