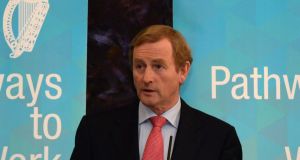 Taoiseach Enda Kenny has claimed the country was now in “a different space” from the situation a few years ago, when unemployment and interest rates soared as 250,000 lost their jobs. Photograph: Cyril Byrne/The Irish Times

The Irish health service should introduce a policy of having no waiting lists and incentivise staff to achieve this goal, a conference on health service reform has heard.

Michael Dowling, the Limerick-born head of one of the largest hospital groups in the US, criticised the setting of targets within the health service, such as the nine-month target for day care and inpatient procedures. “There shouldn’t be a policy that it’s alright for a person to have to wait nine months to be treated. That’s not a policy - it means you’ve given up.”

Mr Dowling, who runs 16 hospitals in the metropolitan New York area, said he “couldn’t fathom” the problem with waiting lists in Ireland. “There should be no waiting lists as a policy. People would be fired in my place if that happened.”

He said there should be competition within and between the new hospital groups in order to drive better performance. Groups should be given the power to “hire, promote and terminate” staff because “you can’t have disruptive forces going in the wrong direction”.

In an opening address, Taoiseach Enda Kenny addressed the challenges facing smaller hospitals, some of which are the subject of safety and quality concerns.

Mr Kenny called for greater co-operation between smaller and bigger hospitals within the hospital group structure currently being rolled out across the State. The new structure represents a “win-win” for all hospitals, he said, though “not all hospitals can be big hospitals”.

People don’t like to lose services and change was often difficult to effect, so it was important to ensure quality services were in place before an inferior service was removed, he cautioned.

Mr Kenny said hospital groups were a crucial stepping-stone on the road to universal health insurance. The priority was to get them up and running as coherently as possible, though legislation would be required before they were converted to trusts with greater autonomy.

“Our fundamental aim is to ensure better patients experiences and outcomes. The patient is at the heart of the reforms we are proposing.”

The introduction of universal healthcare in The Netherlands - the model originally chosen by the Government for its UHI plans - has given rise to a number of problems, Johan van Manen of the Dutch Healthcare Authority told the conference organised by Saolte healthcare group, formerly known as the West/North West Hospitals Group.

These include increasing bureaucracy, the closure of smaller hospitals which can’t meet requirements to carry out a minimum number of procedures and the possibility that patients may lose the right to choose their own hospital or consultant.

Rising premiums and increasing profits for health insurers were also sensitive issues, he said. Other problems were the re-emergence of waiting lists this year after a decade and a lack of choice caused by the disappearance of smaller health providers.

Mr van Manen said there was very little to distinguish the offering of health insurers, who competed on price alone.