Staying positive in the maelstrom of EU-US trade negotiations 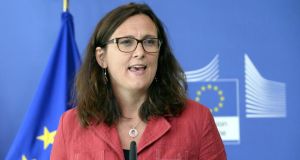 Sitting in her fourth floor office in the European Commission headquarters in Brussels, EU trade commissioner Cecilia Malmström is resolutely upbeat as she settles down to discuss the nuts and bolts of the Transatlantic Trade and Investment Partnership (TTIP), the multibillion euro trade deal currently under negotiation between the European Union and the United States.

The Swedish commissioner’s sunny disposition is all the more remarkable given that she has inherited one of the trickiest portfolios in Jean-Claude Juncker’s commission.

Within weeks of her appointment as EU trade commissioner, an eight-metre high inflatable “Trojan Horse” appeared outside the European Commission building, stopping traffic and leaving EU workers bemused. Today, protests against TTIP have become common in Brussels as lobby groups and left-wing political figures express their opposition to what they believe is a sell-out to big business and a sign-up to lower consumer and regulatory standards.

While the issue has been relatively low-profile in Ireland, the controversial trade deal has emerged as a big political issue in countries such as Germany, Austria and France.

So has it all gone wrong for the EU-US trade deal, launched with such fanfare during Ireland’s EU presidency two years ago?

Malmström, who is in Dublin for today’s launch of a major report on TTIP, first wants to set the record straight about public perceptions of the trade proposal.

“Actually, a huge majority of member states have a majority supporting TTIP,” she says. “If you look at Eurobarometer or the Pew [Research Center] or other such institutes, in most countries of the European Union there is a solid support for the deal. This is because trade is good, and trade has been good for Europe. We are small economies, so we need this.”

She admits that in some countries there are “pockets of resistance” which is “perfectly normal, perfectly healthy”.

“In other countries there is really organised opposition,” she says. “This is mainly in Germany and Austria I would say . . . but we are 28 member states. It’s important to remember that.”

For Malmström, as with other believers in TTIP, the economic benefits of the deal are obvious.

Successful conclusion of the deal is expected to increase EU GDP by 0.5 per cent, the equivalent of about €140 billion. Malmström also says trade is one of the best ways to generate economic growth without hurting the public purse.

“It doesn’t cost anything to agree on a trade deal. You don’t use public money. It opens more markets for European producers, more possibilities for European companies to invest. We know it works internally within the European Union and it has worked in the past with other trade agreements, such as Japan, Singapore and Canada.”

Transparency Nonetheless, when it comes to the PR battle over TTIP, Malmström admits that more work needs to be done. The commission is 100 per cent committed to engaging with the public, she says. “What we’ve tried to do is reach out to people, to meet with stakeholders and engage and listen to them.”

She says progress has been made as regards transparency – one of the main criticisms laid at the door of TTIP negotiators, not least by EU Ombudsman Emily O Reilly who last year called on the commission to release more documents relating to TTIP into the public domain.

Partly as a response to O Reilly’s report, the commission has increased public disclosure of TTIP documents.

“We now have an unprecedented initiative on transparency. Basically, all the documents related to TTIP from the European side are online, legal-type proposals, background papers, position papers, explanatory papers and as we develop common positions as negotiations go on we will put them online as well.”

Nonetheless, Malmström argues that there are limits to what the commission can do, and it’s up to member states to communicate the benefit of an EU-US trade deal to the public.

“The commission cannot do this alone. We are negotiating on behalf of member states. Member states have unanimously told us to do this and they reiterated unanimous support for it during last week’s summit. They have to show the leadership and take the debate to the citizens in their countries, try to listen to the concerns, calm some of the concerns, and explain why this is good for their country.”

There is a sense among some observers that German chancellor Angela Merkel, with an eye to public opinion, has failed to wholeheartedly throw her full backing behind the deal, despite the fact that Europe is desperate for a growth story.

Is Germany living up to its leadership role? Malmström’s response is diplomatic.

“Chancellor Merkel has said a number of times that this is a good thing for Germany and – I’m always careful in quoting figures about how much a country is set to win – but Germany is one of the biggest winners because it is such an export-driven economy.

“She has said it publicly, but of course it is important that the whole parliament, the whole political system is out there and showing the necessary leadership. That cannot be left to the commission. We will do our utmost . . . but we cannot do it alone.”

In terms of the negotiations themselves, Malmström is cautiously optimistic. Her fellow commissioner Phil Hogan, with whom she works closely on the dossier, raised doubts late last year about the commitment of the US to close the deal before the end of the current administration. Is it still feasible that negotiations could be concluded within the mandate of the current US administration?

“I think we are advancing, but it’s not easy. We are talking about the most ambitious trade deal ever, and if anyone thought that could be done in a month, they are gravely mistaken. So we need time, but we are moving forward.”

Negotiations with the US are being conducted in an “open, friendly and constructive” manner, “even if we have differences”, she says.

Divisive issues The eighth round of discussions concluded nearly three weeks ago and there are two more rounds before the summer.

“I think those are needed. They’re needed to really get through the technical material and then to be in a position to put all positions on the table,” says Malmström.

By September, both sides should be ready for “the start of the endgame”, a process that “could be very long”.

Among the most divisive issues for Ireland – and other countries – remains agriculture. She shakes her head emphatically at the mention of chlorinated chicken – an issue in Germany, for example.

“We are not allowing chlorinated chicken,” says Malmström.

While allowing beef imports is also a sensitive issue, Europe also has an “offensive” interest here in opening up food markets.

“There are huge opportunities for European exporters. We have a trade surplus towards the US in the ag sector. There is a lot of untapped potential to export processed food. Cheese, for example, is under a lot of tariffs; this includes Irish cheeses.”

The other major stumbling block that has emerged during the trade negotiations is the issue of investor state dispute settlement (ISDS). The arcane legal concept has become a lightning rod for anti-EU sentiment. ISDS clauses allow companies to take legal action against states should changes in a country’s law affect their businesses.

Malmström argues that ISDSs have been integral to trade deals for years, and are a way of offering businesses – including small businesses – protection if their investment is threatened, for example if a government introduces nationalisations or a change in the licence regime.

However, she says the current system should be reformed.

“I am strongly committed to reforming ISDS. We need to reform [it]. We did that quite considerably in the Canadian agreement and now we’re looking at can we build upon that in TTIP and for all other future agreements for the European Union, making them more limited in scope, making them transparent, so if a company brings a state to court, all the documentation everything has to be transparent for the public to see.”

There have also been calls for an international court to be set up instead to deal with investor disputes. Is this something she would support?

“I think some sort of international arbitration is a very good idea,” Malmström says. “It has been tried before, we haven’t succeeded so it’s not easy, you cannot do it tomorrow, but we can of course try to start looking at the issue, and try to get the support, while trying to reform the system in the meantime.”

In the meantime she says she is committed to ensuring that TTIP negotiations remain as transparent as possible.

“I come from a county where virtually all public documents are public. It’s in my DNA. I’ve fought my whole political life for transparency and openness. Transparency brings confidence, and it also brings efficiency.

“It is also directly related to level of corruption. It doesn’t always help but the more transparent a society is, then the less corruption there is,” she says. “There’s a lot of fear out there about TTIP. We need to communicate and dispel some of those fears.” CV Cecilia Malmström Name: Cecilia Malmström

Position: Sweden’s EU commissioner was appointed as EU trade commissioner by Jean-Claude Juncker last year, taking up her post on November 1st. She is a second-time commissioner, having served in the second Barroso commission as EU home affairs commissioner. She is a former MEP and served as Swedish minister for European affairs between 2006 and 2010.

Why she is in the news: As commissioner for trade she is responsible for negotiating the EU’s proposed trade deal with the US. She is in Dublin today for a government conference on TTIP at Dublin Castle Something you would expect: A true Europhile, she is fluent in Swedish, English , French and Spanish and proficient in German and Italian.

Something that might surprise: She spent two years working as a psychiatric nurse in the early 1990s, before completing a PhD in political science at the University of Gothenburg.