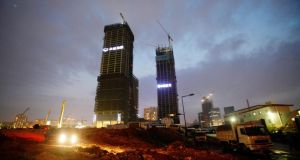 Buildings under construction in Shenzhen: the city is one of China’s fastest growing. Photograph: Alex Lee/Reuters

If you were to name a capital city of China’s economic boom, it would be Shenzhen.

In 1979, Chinese supreme leader Deng Xiaoping proclaimed, “to get rich is glorious” and began a process of economic reform that kick-started China’s remarkable economic growth story of the past three decades and more.

One year later, in 1980, Shenzhen, nestled just across the border from Hong Kong, became a “special economic zone”, a testing ground for capitalism in China, and in a whirlwind period, went from being a town of 30,000 fishermen into a great metropolis, with a population of 18 million.

Deng came to Shenzhen on his southern tour in 1992 and made a landmark speech signalling economic reform. Two years earlier, China’s first McDonald’s opened in the city.

It is a city of migrants – even though we are deep in the province of Guangdong, or Canton, the common language is not the Cantonese spoken in Hong Kong, but Mandarin, the language of power in China.

Irish entrepreneur Liam Casey of PCH, which is based there, says there is very little government involvement in the day-to-day running of his company, something which is not the case in other Chinese cities.

accelerators in the city.

Innovation is on the cards now, and earlier this month, the city hosted a Maker Faire, a platform for DIY workshops and exhibitors, which had as its slogan “Innovate with China”.

It was part-sponsored by Foxconn, the giant factory in the city that employs hundreds of thousands of people.

This is where most the world’s mobile phones come from. Three of the five largest mobile handset companies in the world are here – Huawei, Lenovo and ZTE, and there are 6,000 handset manufacturing companies in Shenzhen.

“Shenzhen is one of China’s fastest growing cities that has first-class infrastructure in terms of technology, trade and transportation capabilities. As the city and the region continue to grow, so too will the demand for capital and financial services,” said Greg Guyett, chief executive of JPMorgan for China, Hong Kong, Macau and Taiwan.

“The opening of our Shenzhen branch demonstrates our confidence in the Pearl River Delta region’s future economic prospects and in China’s steady economic growth.”

The new terminal at the city’s Bao’an airport stretches for 1.5km and is an architectural marvel, a €734 million project with a perforated, honeycomb ‘skin’ that allows in natural light and was designed by the Italian architecture firm, Studio Fuksa.

It’s an inventive place. A man travelling from Hong Kong was picked up at the border recently when they discovered he had attached a huge amount of US dollars in cash to his legs using tape.