Q&A: What is happening in Argentina? 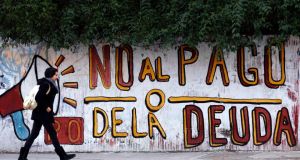 A woman walks past a graffiti that reads “No to the debt payment” in Buenos Aires. Photo: Reuters

Is Argentina out of money?

So if Argentina has enough money to stay current on its government bonds, why is it on the verge of defaulting for the second time in 13 years?

Argentina would like to keep paying its main class of government bonds, but a US District Court ruling says it cannot pay those creditors if it does not also make payments on a small amount of defaulted bonds that are held by a group of hedge funds that are suing the country.

How does an American court have any power over Argentina’s bonds and its government?

Argentina issued bonds under New York law. The country defaulted on them in 2001, when its debt burden became unsustainable. Some years later, Argentina allowed holders of the bonds to enter two exchanges, in which they received new bonds that were worth as little as a quarter of the value of the original securities. Since then, Argentina has consistently made contractual payments on these “exchange” bonds. But 7 per cent of the bondholders did not agree to exchange their bonds, and the country has refused to make payments on them. These so-called holdout bondholders - mainly hedge funds - sued the Argentine government to be repaid in full. Argentina has fought these holdouts at every step.

Why doesn’t Argentina just go ahead and pay the exchange bondholders and ignore the New York court?

US District Court judge Thomas Griesa ruled that any financial institution that passes the money from Argentina to its exchange bondholders would be in contempt of his order. Banks and payment processors that want to conduct any business in the United States cannot risk falling foul of an American court order. Argentina, for instance, deposited $539 million at the Bank of New York Mellon to make a June 30 payment to its exchange bondholders, but the bank has not done anything with the payment. The bonds have a 30-day grace period, which ends on Wednesday.

So, why doesn’t Argentina just pay the holdouts and put its troubles behind it?

Paying the holdouts after years of defying them could undermine the standing of Argentina’s president, Cristina Fernandez de Kirchner, in the eyes of the Argentine people. Many Argentines believe that the default in 2001 was necessary to relieve the country of the burdens placed on it by previous governments. It is also possible that paying $1.5 billion to the leading holdouts could create even greater obligations.

There are other holdouts as well, most of whom have not been participating in the lawsuits. Settling with all the holdouts might cost about $13 billion, according to calculations by JPMorgan Chase. The Argentine government also asserts that doing a deal could activate a clause in the exchange bonds that might allow their holders to demand the same terms as the holdouts. According to some estimates, this clause could lead to new obligations for Argentina that exceed $200 billion, an overwhelming amount, according to various Wall Street estimates. The holdouts, however, strongly dispute whether this clause would lead to such an outcome.

Argentina’s benchmark exchange bond has been trading higher in recent days, suggesting that investors do not believe they face big losses. As a result, the view in the market seems to be that a resolution is in sight, although the country entered into default Wednesday.

Argentina may be calculating that a default will strengthen its hand if it continues to negotiate with the holdouts over the next few weeks. The clause affecting the exchange bondholders expires at the end of this year, so Argentina may wait until then to forge a settlement.

Valuation of $60bn sought for TikTok as Oracle and Walmart take stakes 14:49
Tech sector urges EIIS changes to save high-potential start-ups 14:00
Facebook may pull social media platforms from Europe 12:46
Between Covid and Brexit, the economic fallout next year will be profound 12:45
EY Entrepreneur of the Year awards: meet four industry finalists 19 Sep