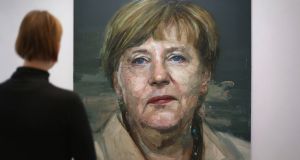 Image of the week: Power portrait

Looking almost, but not quite, as enigmatic and serene as the Mona Lisa, Angela Merkel gazes out from this oil painting by Irish artist Colin Davidson, which is being exhibited this week at the London Art Fair in the Business Design Centre in Islington. The image of Merkel may be familiar to readers or browsers of Time magazine, which commissioned the portrait and used it on its front cover in December when it named Merkel “person of the year”. Davidson told Time: “It is my hope that a sense of the German chancellor’s dignity, compassion and humanity is woven into the paint.” No word yet on whether the eyes follow you round the room. Photograph: Philip Toscano / PA Wire

$27 The price of Brent crude oil per barrel dipped below this level amid a supply glut. The collapse in prices has prompted some to observe that oil is now cheaper than coffee, milk, bottled water and the barrel it ships in.

$10 Analysts at a number of investment banks now reckon prices could fall this low. The apocalyptic hashtag you are looking for is “#hyperdeflation”.

Nobody needs any more stuff. That was the surprising message this week from Steve Howard, an executive at Ikea, the Swedish furniture retailer keen to double its global sales by 2020. “In the West, we have probably hit peak stuff. We talk about peak oil. I’d say we’ve hit peak red meat, peak sugar, peak stuff... peak home furnishings,” he said. Howard’s title is head of sustainability, so he’s not the one who personally positions the miniature ironing boards right under your nose so you can’t possibly go through the exit without buying a miniature ironing board. And he doesn’t appear terribly bothered by what he dubs the “peak curtains” phenomenon, which may be partly because he was talking only about western markets. There are still some parts of the world yet to experience the sheer pointlessness of a miniature ironing board.

Getting to know: Terry Gou

Taiwanese billionaire Terry Gou is the boss of electronics contract manufacturer Hon Hai Precision, better known to everyone as Foxconn. The Apple supplier has made the headlines in 2010 following controversy over its labour practices and a string of suicides and attempted suicides by its factory workers. Gou, who is said to have built his empire up in the 1970s on the back of a $7,500 loan from his mother, is now worth more than $5 billion, according to Forbes. In 2008, when he married his dance instructor at a lavish ceremony, he is reported to have taken off his tuxedo and performed 30 push-ups to prove something or other. Gou is back in the news because Foxconn has its eye on Japan’s Sharp, now the subject of a bidding war, which won’t be decided in the gym.

The reported price tag for a 40 per cent stake in satirical news site The Onion (paid this week by Spanish broadcaster Univision) values its parent company in the range of $500 million, which is twice what Jeff Bezos paid for the Washington Post in 2013. Print may be ailing, but satire is alive and well. Here are five of its best headlines.

1 Animal magic “Kitten Thinks of Nothing But Murder All Day.”

2 Pseudo-feminism “Women Now Empowered By Everything a Woman Does.”

5 Current affairs “‘This Will Be the End of Trump’s Campaign,’ Says Increasingly Nervous Man for Seventh Time This Year.”