Ryanair’s record, ‘son of Concorde’, the ‘Machiavelli of Libor’ and new uses for old phone boxes 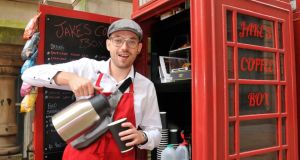 Image of the week: Dial-a-latte Is there anything to be said for another coffee? This is Jake Hollier on his first day of trading at Jake’s Coffee Box, dubbed one of Britain’s “smallest coffee shops”, which is ridiculous, as it’s quite plainly a kiosk with a machine, some sausage rolls and a pile of crisps hanging off it. “Budding barista” Hollier has had the wit to rent out an old BT telephone box in Eden Place, Birmingham, after a string of them were made available for business use following a planning application by a charity trust called Thinking Outside The Box. But to be fair, running businesses out of telephone boxes is a practice as old as, well, telephone boxes. Photograph: PA / PA Wire. In Numbers: Stuffed planes 10.14 million Number of passengers carried by Ryanair in July, an all-time record for the airline. “We knew this summer was shaping up to be another hot one for Ryanair,” said brokers Goodbody.

95 Percentage “load factor” for Ryanair in July, meaning its flights were full and overhead baggage space was even more of a fight to the death than usual. The lexicon: Son of Concorde Airbus has filed a patent for hypersonic jet that will fly twice the speed of Concorde, meaning the “ultra-rapid air vehicle” could bring passengers from London to New York in roughly an hour – barely even enough time to knock back the champagne. With the proposed aircraft set to be limited to 20 people per flight, expect the fares on “son of Concorde” to be stratospheric. But, really, who wants to travel at 4.5 times the speed of sound on a machine with “wing-mounted ramjets” and a rocket motor powered by hydrogen and oxygen? The “near vertical” take-off alone would be enough to put anybody off breakfast in two time zones.

Getting to know: Tom Hayes The first person to be found guilty by a jury of manipulating the London interbank offered rate (Libor) went by some interesting nicknames and some truly unimaginative ones. For one investigator, ex-trader Tom Hayes (35) was a “Machiavelli of Libor”, the ring-leader in a vast conspiracy. Colleagues saw him through more of a schoolboy lens. They dubbed him “Tommy Chocolate” for choosing hot chocolate over beer on nights out, and “Rain Man”, because like Dustin Hoffman’s character in the film of the same name, he has Asperger’s syndrome. Hayes, who told the court he “had the same superhero duvet cover that I had when I was eight when I was 24”, has been sentenced to 14 years in prison. “Pete the Greek” will not be prosecuted.

The list: Missed expectations Corporate earnings reporting season for the three months to the end of June has worked out better for some than for others, with some of the mightiest companies in the world proving they still have the ability to disappoint analysts.

2 Apple Missing expectations on both iPhone shipments and its forecast for the current quarter has put an unsightly dent in its share price.

3 IBM “Big Blue” beat on profits, but missed on sales, and it hasn’t gone unnoticed on Wall Street that its revenue has now declined for 13 consecutive quarters.

4 Baidu The Chinese search engine giant couldn’t locate the numbers that analysts were looking for when it reported earnings last week.

5 Anheuser-Busch InBev Second-quarter profit dropped sharply for the world’s largest brewer. It’s because there was no football World Cup on, not because everybody has finally got sick of Budweiser.

1 Fair deal? Family at odds with hospital and each other not so sure
2 Ten of the most mysterious aircraft disappearances
3 EU farming subsidies deal criticised as insufficiently green
4 Central Bank finds litany of shortcomings in fund firms
5 AIB settled Citigroup dispute over Rusnak at fraction of $872m claim
6 ‘I hate haggling because I hate when people do it to me’
7 Roll up, roll up: capitalism will drive cannabis legalisation in Ireland
8 Monsoon landlords win challenge over creditors arrangement that cut rents
9 Stepping in when fire hit a rival was key to securing large contracts
10 Prominent Dublin pub baron’s group to open other new boutique hotels in 2018
Real news has value SUBSCRIBE