‘Tubmans’, Tim Armstrong, baking at Ballymount with Enda and the week in drones 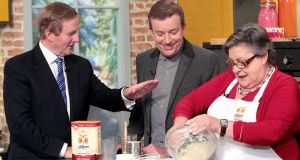 Image of the week: Breakfast with Enda

It was off to Ballymount this week for Enda Kenny, who dropped into TV3’s Ireland AM for the first time in three years. The Taoiseach was interviewed by presenter Mark Cagney on the breakfast show’s grey sofas. He was then asked to help out in the kitchen with copresenter Alan Hughes and resident baker Catherine Leyden, in a slot sponsored by Odlums. Cagney subtly brought up the, ahem, challenges of being a presenter during a referendum, in light of Broadcasting Authority of Ireland rules. “I’m not allowed to express an opinion, as you know, because of the BAI,” said Cagney. “But it’s very hard to argue against equality on any level.” Kenny hummed in agreement before he got stuck into the baking.

In numbers: the forgetful internet

250,000 Total number of requests that Google has received to remove information from its search results, since the controversial “right to be forgotten” ruling by the Court of Justice of the European Union last year.

920,000 Total number of links that were requested to be removed by people who didn’t want particular stories or details about their lives showing up in search results. Some 41 per cent have been taken down.

48 “Right to be forgotten” cases that Google will be asked to review after the UK’s data privacy regulator said the search engine had not got its decisions “quite right”.

Tubmans don’t exist yet, but if a campaign to get a female face on a US banknote wins out, a “Tubman” could become shorthand for $20 bills. All seven bills in circulation in the US feature a man’s face and a group called Woman on 20s has presented a petition to Barack Obama to take former US president Andrew Jackson off the $20 note and replace him with the winner of its online survey, escaped slave turned abolitionist Harriet Tubman. The campaign follows a similar initiative in the UK led by feminist Caroline Criado-Perez, which resulted in the Bank of England decision to put Jane Austen on the tenner. Women on 20s director Susan Ades Stone said the group’s work would not be done “until we’re holding a Harriet $20 bill in our hands”. Jackson hated paper money anyway. He was more of a coin guy.

Getting to know: Tim Armstrong

Original “You’ve got mail” company AOL is being sold to telecoms company Verizon, but chief executive Tim Armstrong will be sticking around. “We made that part of the deal,” he told AOL staff. Armstrong, an ex-Googler, has been the boss of AOL since 2009, which was when Time Warner unwound its ill-timed 2000 merger with the kings of the dial-up internet era. Armstrong has his detractors. The ever-blunt US site Gawker claims he “speaks with exactly the catalogue of anti-semantics that you’d expect a guy with a quarter-zip sweater surgically attached to his abdomen to speak”. This was not meant as a compliment. Even Forbes, who says Armstrong “delivers value for shareholders”, notes he has “never been the kind of boss to win a popularity contest”. The man himself says: “Let’s mobilise.”

Drones have been in the news a lot this week so excite your friends in the pub with these updates from drone world.

1 Cleared for take-off: US senators are pushing through a Bill that will allow for the commercial use of drones, ahead of finalised Federal Aviation Administration rules. This will definitely end well.

2 Boom time: Some 44 per cent of companies would consider using drones in the next five years if airspace regulations are relaxed, according to a survey by insurance giant Munich Re. Yes, there is a link between experiments with unmanned flying objects and the need to buy insurance.

3 Overhead shots: Camera-equipped drones operated by CNN may soon be flying over US cities, bringing its audience the news that Periscope can’t.