TCD professor will assume the position from Patrick Honohan 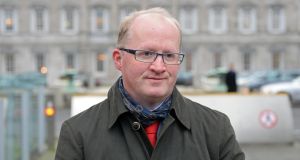 The Government has nominated economist Prof Philip Lane to succeed Patrick Honohan as governor of the Central Bank.

Prof Lane (46) is the Whately chair of political economy at Trinity College Dublin and has been head of economics at the university for 12 years.

He has a PhD in economics from Harvard and was professor of international macroeconomics at TCD before taking up his current position in 2012.

His nomination, on foot of a recommendation from Minister for Finance Michael Noonan, was ratified by the Cabinet at its meeting this morning. The actual appointment is made by President Higgins.

Highly regarded in economics circles, Prof Lane was one of two candidates on a shortlist presented to Mr Noonan. The other was Robert Watt, secretary general of Department of Public Expenditure.

In his capacity as governor Prof Lane will sit on the governing council of the ECB, which sets euro zone interest rates and oversees the bank’s interventions in financial markets.

“Also, his appointment by ECB president Draghi to chair the advisory scientific committee of the European Systemic Risk Board demonstrates the standing he is held in at European level.”

Prof Lane has been academic consultant for the ECB, the European Commission, International Monetary Fund, the World Bank, the Organisation for Economic Cooperation and Development, the Asian Development Bank and a number of national central banks.

He has been an International Research Fellow at the Kiel Institute of World Economics since 2005 and, since 2007, a member of the Royal Irish Academy. He graduated in economics from TCD in 1991 with a first-class degree and was the top-ranked student in economics that year.

In addition to his work at TCD and the EBRD, he is director of the International Macroeconomics and Finance Programme at the Centre for Economic Policy Research.

His nomination follows an open selection process, the first for the Central Bank governorship. “This was undertaken due to the unique importance of the position of Governor of the Central Bank to the Irish financial system and the Irish economy,” said Mr Noonan.

In a statement today, the Minister said more than 100 potential candidates around the world were identified in the selection process.

Mr Noonan paid tribute to Prof Honohan, who will leave the Central Bank in the coming weeks, saying he took up the governorship in 2009 at a very difficult time for the State.

“He has played a key role in stabilising our economy and in our move back towards prosperity and has also overseen significant reform in the Central Bank during this period,” Mr Noonan said.

“As Minister for Finance, I have greatly valued his expertise and counsel. On behalf of the Government I sincerely thank him for his contribution and wish him every success in the future.”

1 Bogus notion that supply will cure our housing woes
2 Life as a Facebook moderator: ‘People are awful. This is what my job has taught me’
3 Bank leaked my loan request to family who tried to rip me off
4 Irish companies restrict travel over coronavirus fears
5 Suspicions rife as key Brexit trade talks begin in Brussels
6 ‘The only time apartments were viable was in . . . Ballsbridge, Killiney and Dalkey’
7 Corona beer firm reeling after 8% slide due to coronavirus
8 We have little chance of building enough homes to meet election promises
9 Coronavirus: Iseq down 11% in five days as global sell-off is worst week since 2008 crisis
10 Coronavirus: ‘All bets are off’, says aircraft industry chief
Real news has value SUBSCRIBE