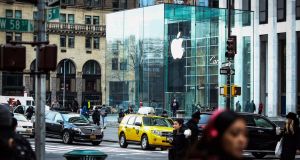 5th Avenue in New York. The Obama administration – preoccupied with the aftermath of financial crisis and the struggle with bitterly hostile Republicans – has only recently been in a position to grapple with competition policy. Photograph: Chris Goodney/Bloomberg

When Verizon workers went on strike last week, they were mainly protesting efforts to outsource work to low-wage, non-union contractors.

But they were also angry about the company’s unwillingness to invest in its own business. In particular, Verizon has shown a remarkable lack of interest in expanding its Fios high-speed Internet network, despite strong demand.

But why doesn’t Verizon want to invest? Probably because it doesn’t have to: many customers have no place else to go, so the company can treat its broadband business as a cash cow, with no need to spend money on providing better service (or, speaking from personal experience, on maintaining existing service).

And Verizon’s case isn’t unique. In recent years many economists, including people like Larry Summers and yours truly, have come to the conclusion that growing monopoly power is a big problem for the US economy ? and not just because it raises profits at the expense of wages. Verizon-type stories, in which lack of competition reduces the incentive to invest, may contribute to persistent economic weakness.

The argument begins with a seeming paradox about overall corporate behavior. You see, profits are at near-record highs, thanks to a substantial decline in the percentage of GDP going to workers.

You might think that these high profits imply high rates of return to investment. But corporations themselves clearly don’t see it that way: their investment in plant, equipment, and technology (as opposed to mergers and acquisitions) hasn’t taken off, even though they can raise money, whether by issuing bonds or by selling stocks, more cheaply than ever before.

How can this paradox be resolved? Well, suppose that those high corporate profits don’t represent returns on investment, but instead mainly reflect growing monopoly power.

In that case many corporations would be in the position I just described: able to milk their businesses for cash, but with little reason to spend money on expanding capacity or improving service. The result would be what we see: an economy with high profits but low investment, even in the face of very low interest rates and high stock prices.

And such an economy wouldn’t just be one in which workers don’t share the benefits of rising productivity; it would also tend to have trouble achieving or sustaining full employment. Why? Because when investment is weak despite low interest rates, the Federal Reserve will too often find its efforts to fight recessions coming up short.

So lack of competition can contribute to “secular stagnation” – that awkwardly named but serious condition in which an economy tends to be depressed much or even most of the time, feeling prosperous only when spending is boosted by unsustainable asset or credit bubbles. If that sounds to you like the story of the US economy since the 1990s, join the club.

There are, then, good reasons to believe that reduced competition and increased monopoly power are very bad for the economy. But do we have direct evidence that such a decline in competition has actually happened? Yes, say a number of recent studies, including one just released by the White House.

For example, in many industries the combined market share of the top four firms, a traditional measure used in many antitrust studies, has gone up over time.

The obvious next question is why competition has declined. The answer can be summed up in two words: Ronald Reagan. For Reagan didn’t just cut taxes and deregulate banks; his administration also turned sharply away from the longstanding US tradition of reining in companies that become too dominant in their industries.

A new doctrine, emphasising the supposed efficiency gains from corporate consolidation, led to what those who have studied the issue often describe as the virtual end of antitrust enforcement.

True, there was a limited revival of anti-monopoly efforts during the Clinton years, but these went away again under George W Bush. The result was an economy with far too much concentration of economic power. And the Obama administration – preoccupied with the aftermath of financial crisis and the struggle with bitterly hostile Republicans – has only recently been in a position to grapple with competition policy.

Still, better late than never. On Friday the White House issued an executive order directing federal agencies to use whatever authority they have to “promote competition.” What this means in practice isn’t clear, at least to me. But it may mark a turning point in governing philosophy, which could have large consequences if Democrats hold the presidency.