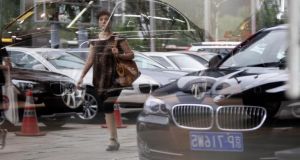 A woman is reflected on the glass wall of a BMW showroom in central Beijing. Since July, BMW is among at least seven foreign carmakers that have announced price cuts following the NDRC investigation, in an attempt to stave off accusations of anticompetitive behaviour. Photograph: Jason Lee/Reuters

Beijing has been sunny and warm, with pollution running at manageable levels, but the mood among foreign companies operating in China is dark after a series of investigations and fines – that foreigners are feeling the keenest – over antitrust behaviour.

Investments in China by foreign companies – excluding financial firms – fell 17 per cent in July, the biggest drop in five years, though the ministry of commerce said the drop had no connection with the antitrust probes.

China has held antitrust investigations into Microsoft, Starbucks, GlaxoSmithKline, Apple, McDonald’s, New Zealand dairy giant Fonterra and many others as Beijing tries to enforce the anti-monopoly law China enacted in 2008.

It allows the government impose fines of as much as 10 per cent of a company’s annual revenue. Companies that co-operate can get lighter penalties.

The antitrust regulator, the National Development and Reform Commission (NDRC), launched an investigation into the auto industry following domestic media complaints that foreign carmakers were overcharging Chinese customers for vehicles and spare parts.

While Beijing says the crackdowns on foreign firms are aimed at stopping abuses, critics allege China is using antitrust and other investigations to protect and bolster domestic firms.

And last week, overseas carmakers and components manufacturers were the target of heavy fines. Mercedes-Benz was found guilty of manipulating prices for aftersales services in China.

The Jiangsu Province Price Bureau found evidence of anticompetitive practices after raiding Mercedes-Benz dealerships in the eastern coastal province and an office in neighbouring Shanghai.

Since July, Tata Motors’ Jaguar Land Rover, Mercedes-Benz, Audi and BMW are among at least seven foreign carmakers that have announced price cuts following the NDRC investigation, in an attempt to stave off accusations of anticompetitive behaviour.

Chinese media reported that Audi, the best-selling foreign premium car brand in China, would be fined about 250 million yuan (€30.6 million).

American Chamber of Commerce in China chairman Greg Gilligan called for dialogue with US and Chinese officials about concerns among its members.

The European Chamber of Commerce in China, which represents 1,800 firms here, is normally circumspect in its dealings with the Chinese government. But the tone of its response to the stories of checks at member companies and punishments imposed was one of alarm, particularly as it felt European companies were being picked on.

“While the European chamber recognises that a number of Chinese companies have been investigated for AML [anti- money-laundering] violations, the European business community is also increasingly considering the question of whether foreign companies are being disproportionately targeted in the investigations,” the chamber said.

NDRC spokesman Li Pumin said the government was not targeting foreigners, and reiterated that China would punish violators of its anti-monopoly law, regardless of nationality.

But the chamber believes that in some of the industries under investigation domestic companies have not been targeted for similar violations. In some cases involving joint ventures, only the foreign partner has been named as being a party to the investigations, it said.

Competition law should not be used as an administrative instrument to harm targeted companies or serve other aims, such as administratively forcing price reductions, it added. “China needs to continue to implement its AML in a transparent, impartial and consistent manner and in a way that is beneficial for consumers and fair for business.”

Cars and spare parts are expensive in China, though, and some domestic producers believe the foreign firms have too much leverage over car dealers and auto-part suppliers in China, enabling them to control prices.

JP Morgan said in a note earlier this month that, in the longer term, forcing European carmakers to lower the price of spare parts and imported vehicles could see margins in China normalise to levels currently seen in Europe.