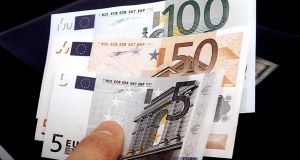 The trend, which is noted in the latest KBC Bank/Chartered Accountants Ireland business sentiment survey, was linked to upward pressure on wages and a weaker euro, which increases the cost of importing goods and services.

Some 48 per cent of firms reported cost increases in the final quarter of 2015, the survey found, while just 5 per cent experienced a fall in costs.

This represented “the poorest cost out-turn” since the third quarter of 2008 when a spike in oil prices to nearly $145 per barrel boosted costs globally.

“With oil prices now tumbling and international inflation extremely low, a sustained rising trend in domestic costs could become a significant impediment to the persistence of strong growth,” the survey noted.

Some 55 per cent of firms indicated that wages were the area of costs under most upward pressure.

Overall, the latest business sentiment survey rose to another nine-year high amid stronger-than-expected economic growth and a further strengthening of the exchequer’s financial position.

With two-thirds of firms signalling increased business volumes and less than 6 per cent indicating weaker activity, the report pointed to a broad-based recovery in economic activity.

However, while activity levels in firms continued to increase as 2015 drew to a close, the pace of growth was only fractionally ahead of the previous quarter.

Output from manufacturing companies – while still positive – was also less widespread than previously reported. “This is not entirely surprising in that it reflects both that this sector is at a later stage of the upswing than most others and the rate of growth recorded by these firms in recent years has been exceptional,” the report said.

Nonetheless, the survey said the acceleration in domestic activity was consistent with 7 per cent growth in gross domestic product (GDP), recorded in the third quarter by the Central Statistics Office (CSO).

“Significantly, companies are reporting increases in their business volumes in 2015 that broadly tally with current estimates suggesting Irish GDP grew by close to 7 per cent. So, the sentiment survey suggests that from corporate Ireland’s perspective, recovery is now both strong and broadly based.”