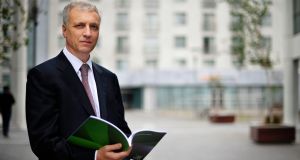 Tim Callan from the ESRI. The think tank has said that raising the minimum wage is an inefficient way to reduce poverty. File photograph: Aidan Crawley

Raising the minimum wage is an inefficient way to reduce poverty, according to the Economic and Social Research Institute (ESRI).

A study by the economic think tank showed that hikes to the minimum hourly pay rate do not benefit the majority of those living below the poverty line.

This was because relatively few of those living in persistent poverty actually receive the wage.

The finding questions the efficacy of using the minimum wage as a tool in the fight against poverty.

It also comes amid speculation that the Low Pay Commission is likely to recommend a 25 per cent increase to the current minimum hourly rate of €9.15 when it reports next month.

In its recent programme for government, the Government pledged to reduce poverty by supporting an increase in the minimum wage to €10.50 an hour over the next five years.

The ESRI’s study found that, while increases to the minimum statutory wage rate did benefit low-paid workers, most of them were in households in the middle of the income distribution and “very few” were in households with incomes below the poverty line.

The ESRI highlighted two typical examples illustrating why this might be the case.

One involved young adults earning low wages but residing in family homes where the parents’ income was sufficient to keep the household above the poverty threshold.

The other involved low-wage earners with few dependants, which meant they were less at risk from poverty.

The institute’s findings were produced with the aid of data from a recent Survey on Income and Living Conditions and on the basis of low pay being defined as less than two-thirds of the median hourly earnings in the State.

The latter equated to €11.40 an hour, roughly the same as the living wage calculated by the Living Wage Technical Group here, and defined as the minimum pay workers need to meet their needs for basic utilities, food and clothing.

“The essential message is that there is very little overlap between low pay and poverty, and therefore we shouldn’t think of the minimum wage as being a major tool for dealing with poverty,” ESRI economist Tim Callan told The Irish Times.

“It isn’t that we’re against increases in the minimum wage; we just think that’s a separate debate, and these things should be kept separate,” he said.

The ESRI study noted that the proportion of low-paid workers in the economy remained relatively static throughout the boom years at 20 per cent, but rose to 23 per cent in 2013 on foot of the financial crisis.

This was more of an increase than that experienced in most peer countries.

The ESRI said that while it is often assumed that economic recessions lead to rising inequality, there is no concrete evidence of this.

The long-run view is that wage inequality in Ireland has declined substantially from the levels of the mid-1990s through to the early 2000s, the report said.

An increase in hourly wage inequality in the “bubble years” was then counterbalanced by a reduction in inequality during the recession.

Some signs of an increase in wage inequality have been detected from 2013 onward, in tandem with recovery in the wider economy, but further studies are needed to confirm this trend.

1 The ‘gangster’ superior, the Irish priest and the wealthy widow
2 Dublin housebuilder records €11m gain after striking deal with bankers
3 Construction body calls for loan scheme to help first-time buyers
4 Qualcomm shares soar on surprise legal settlement with Apple
5 Petrel gets injunction preventing share sales by certain investors
6 Particle coating process adds layer of innovation to pharmaceuticals
7 Majority of Irish whiskey to be excluded from US tariffs
8 21 years to save for a deposit in Dublin as housing crisis deepens
9 Irish people like nothing more than being bribed with their own money
10 How to . . . screen record on your phone or laptop
Real news has value SUBSCRIBE