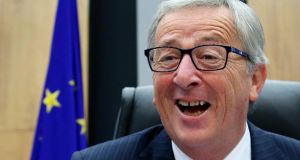 For the European Commission’s new president Jean-Claude Juncker it is likely to be a difficult few weeks. Photogrtaph: Francois Lenoir.

The revelation that more than 300 companies channelled billions of euro through Luxembourg could not come at a more inopportune time for European Commission president Jean- Claude Juncker.

The former Luxembourg premier and his team of 27 commissioners began their five-year term at the commission’s helm just this week.

Today’s revelations will present Juncker with the first major challenge of his tenure.

As Luxembourg’s premier for 18 years, he was the man in charge when most of the tax rulings revealed by the International Consortium of Investigative Journalists (ICIJ) investigation today were agreed.

However, in an interview with German television this year he defended Luxembourg’s tax system as being in “full accordance with European law”.

“No one has ever been able to make a convincing and thorough case to me that Luxembourg is a tax haven,” he said.

The difficulty for Juncker is that the publication of the ICIJ documents occurs at a time when the commission has embarked on an unprecedented crackdown on the tax arrangements offered by individual member states.

Earlier this year the commission’s powerful competition arm opened an investigation into tax rulings offered by the Republic, the Netherlands and Luxembourg respectively to Apple, Starbucks and Fiat, with a further investigation into Luxembourg’s dealings with Amazon initiated last month.

Since then the duchy has provided the commission with all information requested, though the country’s finance ministry insisted the allegations of state aid in the case of Fiat and Amazon were “unsubstantiated”, saying it was confident the investigation would show no special tax treatment or advantage was awarded to either company.

Simultaneously, Luxembourg has been facing increased pressure from other EU countries regarding its strict bank secrecy laws. Just three weeks ago, Luxembourg and Austria agreed to back new rules on the automatic exchange of information that will oblige all member states to disclose account details of non- resident deposit holders, in a bid to clamp down on tax evasion.

The EU is in negotiations with Switzerland, Liechtenstein, Andorra, San Marino and Monaco about implementing similar rules.

With a population of just over 500,000, Luxembourg has the highest gross domestic product per capita in the EU, more than 2½ times the EU average.

About 44 per cent of Luxembourg’s population comprises foreign nationals, many working in the city’s funds and financial services industry, as well in the various EU institutions located in the duchy.

The latest revelations of widespread tax rulings for individual companies will increase pressure on the duchy to consider a rethink of its corporate tax arrangements. It will also present incoming competition commissioner, former Danish finance minister Margrethe Vestager, with her first major challenge, as her directorate general decides whether to initiate further state-aid investigations against Luxembourg.

The fact that Luxembourg is due to assume the rotating presidency of the Council of the European Union in July next year, will serve to bring the discreet duchy into the EU spotlight.

For Juncker it is likely to be a difficult few weeks as he assumes his new position.