Loans for home purchases and other spending still falling 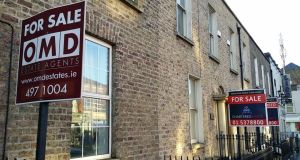 Household loan repayments exceeded drawdowns by €315 million during January, according to new figures released by the Central Bank.

This follows a net monthly decrease of €43 million in December.

The figures show the most substantial decrease in January was linked to loans for consumption purchase, which fell by €183 million.

Household deposits rose by just €49 million or 0.1 per cent in the 12 months to the end of January. During the last year there has been a shift towards overnight deposits to the value of €4.7 billion, which were offset by a decline in agreed-maturity deposits of €4.6 billion.

The Central Bank said the outstanding amount of loans to Irish households decreased by 3.2 per cent in January 2015, following a decrease of 3.7 per cent in December 2014. The outstanding amount of loans for house purchase, which account for 81 per cent of total household loans, fell at an annual rate of 2.3 per cent. Lending for consumption and other purposes declined by 7 per cent year-on-year.

The Central Bank said developments in January reflected declines in short-term and long-term NFC loans of €538 million and €138 million, respectively. Medium term NFC loans increased by €161 million over the month.

NFC deposits increased by €2 billion in January, driven primarily by developments in the overnight category which saw a €1.1 billion increase over the month. On an annual basis, net inflows of deposits amounted to €7.7 billion.

Credit institution borrowings from the Central Bank fell by €1.6 billion leaving the outstanding stock of borrowings at €19.1 billion.