As some Greek politicians fume at the news that PM Tsipras conceded to lenders' demands, others prefer to wait for further details, giving him temporary support. Video: Reuters 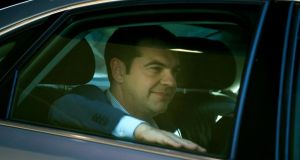 Alexis Tsipras, Greece’s prime minister, leaves by car after attending an emergency meeting with the heads of the three creditor institutions in Brussels on Wednesday. Photograph: Jasper Juinen/Bloomberg

Mr Tsipras spent all afternoon in a meeting with the heads of the European Commission, the International Monetary Fund, the European Central Bank and euro zone finance ministers, but officials said there was no breakthrough.

“They are still stuck at the same red lines,” a euro zone official said just before the meeting at EU headquarters ended after more than four hours.

Euro zone finance ministers, arriving for an emergency meeting called to try to approve an agreement, said there was no deal yet ready to endorse and forecast an overnight marathon.

The Slovak finance minister arrived with a book to read.

German Finance Minister Wolfgang Schaeuble, whose country is Athens’ biggest creditor, said he did not expect any deal on Wednesday since preparations for a cash-for-reform agreement had barely advanced. His Austrian colleague was among several to say Greek demands for debt relief were a problem.

A Greek government official said the creditors’ counter-proposals, handed to Athens on Wednesday morning and rapidly leaked, were not acceptable as they stood, but Mr Tsipras hoped for an agreement late on Wednesday or on Thursday when all 28 EU leaders arrive for a regular two-day summit.

Before leaving Athens, Mr Tsipras attacked the position of “certain” creditors – a swipe at the IMF – as strange since he said they had rejected fiscal measures Athens put forward to plug a budget gap.

“This odd stance seems to indicate that either there is no interest in an agreement or that special interests are being backed,” the premier tweeted.

IMF chief Christine Lagarde, who attended the meetings in Brussels, spelled out her objection to Greek proposals centred on higher taxes to plug a budget gap.

“You can’t build a programme just on the promise of improved tax collection, as we have heard for the past five years with very little result,” she said.

An EU official insisted talks had not broken down and said the exchange of proposals was a normal part of the negotiation. But a Greek official said the lenders’ five-page document – full of crossings-out and underlining in red ink – differed little from their initial June 3rd offer and took scant account of Athens’ proposals.

The talks are especially fraught because there is so little time left to reach a deal before Greece has to make a repayment to the IMF on June 30th, the day its current bailout expires.

If Greece misses that payment and is declared in default to the IMF, it could trigger a bank run, capital controls and an eventual Greek exit from the euro zone, showing that membership of the currency is not irrevocable as its founders intended.

“Of course we want changes and they don’t, and this is part of the bargaining process, albeit less effective when done publicly,” a senior official from one of the creditors said.

The Greek proposals featured a series of tax hikes on consumption, businesses and the wealthy and higher contributions to pensions to meet budget targets. The IMF wants to see more savings achieved through budget cuts.

A senior German official said Berlin could not imagine clinching an aid-for-reform deal without the IMF, which was needed not only for its funds but also its expertise.

Greece will have to put the agreed measures through its parliament by Monday so that some other euro zone parliaments can endorse the deal and unblock aid funds.

Athens must repay €1.6 billion euros to the IMF next Tuesday. EU officials said the only way to fund that was for euro zone governments to hand over nearly €2 billion in profits from ECB holdings of Greek government bonds purchased in 2011-12.

The more concessions Mr Tsipras makes, the more resistance he will face in parliament within his leftist party and on the streets, where recent protests, some organised with Syriza’s support, have underlined opposition to yet more belt-tightening.

“There are four people in my household, and we are living on €600 a month. Where else does that happen?” said Antonia Methoniou, 59, who took early retirement on health grounds.

The IMF says Greece will need either some form of debt restructuring or further loans to make its finances sustainable.

But euro zone officials insisted the creditors would not discuss any debt restructuring until after Greece implements the remainder of its bailout programme, and German Chancellor Angela Merkel has ruled out any “haircut” or debt write-off.

This will add to the difficulty of getting parliamentary approval in Athens, notably from the nationalist Independent Greeks, whose support Mr Tsipras needs for a majority.

They also reject moves to scrap VAT exemptions enjoyed by some Greek islands.

“I could not vote for such a measure, nor, obviously, could I participate in a government violating a line on which we received a mandate from the Greek people,” party leader Panos Kammenos tweeted on Tuesday.

But economy minister George Stathakis said he was confident parliament would back a deal by June 30th: “I think this balanced deal is defensible to Syriza, and in Greek society too.”