Kenny plans to cut tax for low-middle earners below 50% 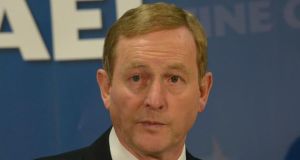 Taoiseach Enda Kenny has said the Government will cut taxes to bring the overall rate for low and middle income earners below the 50 per cent threshold.

Outlining a broad approach to taxation reform, Mr Kenny said the current 51 per cent rate is penal and “bad for recovery”.

He was addressing the annual Ibec president’s dinner in Dublin on Thursday night, taking the opportunity to spell out the Government’s ambitions for continued economic recovery and sustainability.

“I am committing this evening that as part of the upcoming general election campaign, that Fine Gael will publish a detailed, fully costed five-year economic plan,” he said.

As well as “replacing all the jobs lost during the recession”, a pre-prepared speech outlined ambitions to bring unemployment - currently at 9.5 per cent and peaking at more than 15 per cent in 2012 - to 6 per cent.

It aims to deliver a surplus in public finances, reduce debt and “make work pay through a combination of cuts in the rate of tax on work, better and more affordable childcare and a higher minimum wage”.

Mr Kenny also committed to “protect and further” Ireland’s often controversial corporate tax regime as well as publishing a “comprehensive multi-year capital plan that will address many of the emerging infrastructural bottlenecks in the economy”.

There would be a cut to the 7 per cent universal social charge (USC), he said, as the Government, should it return to power, would focus on ending the “unfair tax treatment” for the self-employed and small businesses.

While welcoming a “surge in tax revenue”, he warned the country could not afford to repeat past mistakes of auction politics. “That’s not going to happen,” he said.

“Some have described the upcoming October budget as the end of the recovery plan. But actually it’s only the start.”

The Ibec event formally introduced incoming president Gerry Collins who, at a pre-dinner meeting with Minister for Finance Michael Noonan and Minister for Public Expenditure Brendan Howlin, set out his own vision for future fiscal priorities.

He called for an additional €1 billion investment in capital expenditure to buttress the economy, after “years of underinvestment” in infrastructure, health and education.

Investment was a broad theme, and Mr Collins zoned in on a lack of development outside the capital, raising the prospect of improving Ireland’s “Atlantic cities”, particularly when many companies wish to avoid the capital.

“A growing economy will produce extra resources, but the truth is that high personal taxes are what most impede growth.”

1 Why is Germany suddenly embracing its inner Keynesian?
2 Prospect of foreign travel highlights remaining restrictions here
3 Passengers face queuing in car parks at Dublin Airport
4 Major credit union plans to limit savings accounts to €40,000
5 Brother is dragging his heels as executor of uncle’s will - is there anything I can do?
6 Tesla’s Elon Musk calls for breakup of Amazon in tweet
7 Tesco to cut emissions by converting waste food from Irish stores to gas
8 Student accommodation sector set for harsh Covid-19 lesson
9 Domestic economy may get boost from multinationals
10 Penneys will not reopen on Monday despite expected changes to lockdown rules
Real news has value SUBSCRIBE