ECB and Bank of England have mutual interest in ensuring stability, bank says 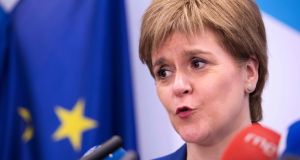 JP Morgan said on Thursday a Scottish currency in a newly independent Scotland could initially be stabilised near parity with sterling by the Bank of England and European Central Bank, given their strong mutual interest in ensuring stability there.

The US bank created a stir in financial markets on Wednesday by saying its “base case” forecast now is that Scotland gains independence and introduces its own currency before Britain leaves the European Union in 2019.

A Scottish central bank would face huge challenges, such as having no access to sterling reserves large enough to underpin a lender of last resort facility for Scotland’s financial sector.

“We could imagine a framework where both the ECB and the Bank of England made some small portion of their reserves available to assist in the management of the new currency upon its launch,” JP Morgan economist Malcolm Barr said.

“There could be an initial commitment to try and stabilise the new currency near parity to the pound, with interest rates set by a Scottish central bank above those set by the Bank of England,” Mr Barr said in a note to clients.

All countries joining the EU are obliged to join the euro at some point, but there is no pre-set time frame. This could take years for Scotland, Mr Barr said, citing the example of Sweden which still uses its own currency.

Scotland voted to stay in the EU in last week’s referendum, putting it at odds with the United Kingdom as a whole, which voted 52-48 per cent in favour of Brexit.