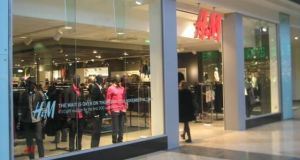 While the market share of Irish-owned retail firms has declined, the new entrants, such as H&M, Zara and Ikea, have brought variety and competition to the Irish retail sector, driving down prices

If you walk around the main shopping districts of Dublin, Cork and Galway, many of the shops you see are part of UK-based retail chains, such Marks & Spencer and Tesco.

In more recent years, we have also seen retail chains based elsewhere in the European Union open up, including Zara, H&M, Ikea, Lidl and Aldi.

While the market share of Irish-owned retail firms has declined, the new entrants have brought variety and competition to the Irish retail sector, driving down prices.

These foreign retailers buy their products all over the world and they then ship it, as required, to their stores throughout the EU. Increasingly, grocery chains supply their supermarkets from central distribution depots, with all the daily needs of individual supermarkets met from a single large delivery. This is far more efficient than having every manufacturer and wholesaler make deliveries to individual shops.

This model has been made possible by the single EU market initiated in 1993. What are the implications of a British vote to leave the EU for Ireland’s retail scene?

If the UK leaves, it is likely we will have to implement EU customs controls on everything coming from the UK. This would return trade between Ireland and the UK to the situation we were in before we entered the then EEC in 1973.

Currently, British retailers in Ireland such as Marks & Spencer can take delivery each day of a container coming from the UK with the wide variety of products for sale in their shops.

However, if, after Brexit, the container had to pass through customs in Dundalk en route to Dublin, the result could be a nightmare. Customs would need to check what, if any, duty was applicable on each of the products in the container, for example a batch of clothing mixed with food items.

The duty payable could depend on where the product was originally produced. This checking of products could take an inordinate amount of time.

For many shops, EU customs barriers would make the current retail model unsustainable and, even if the firms persevered with the model, the time delays and expense of the changed regime would be very serious.

While Irish customers might not care about the tribulations of British retailers, they would certainly care about the major increase in prices which the new regime would entail.

In the longer term, some of these costs would be avoided if retail chains from the EU expanded to replace their UK competitors. However, even for retail groups based elsewhere in the EU, the new situation could bring additional expense as they currently serve the Irish and British markets through similar channels. Setting up special channels to get their products to Ireland without having to clear customs once or even twice could be expensive; some might even decide to shut their Irish operations. Transhipment via the UK could drop dramatically, with implications particularly for Dublin Port.

Brexit could also have adverse implications for public procurement sales to the UK. Prior to the creation of the Single Market in 1993, EU national governments could give precedence to producers in their own countries when buying goods or services, which tended to benefit producers in larger countries.

For Irish producers, the benefits from privileged access to the Irish market was more than offset by being locked out of the much bigger markets across the EU.

All of this changed with the Single Market in 1993. This has been a major benefit for Irish who sell to government bodies in Northern Ireland or Britain.

With Britain out of the EU, there would be public pressure in the UK to switch to a “Buy British” model despite the possible increased costs involved. This remains another area of risk posed by Brexit to Ireland’s economy.

1 Hugo MacNeill steps back from Goldman Sachs role
2 Irish company paid €1.2m a year by collapsed Blumenthal-linked Australian restaurant
3 Coronavirus test fast-tracked by Dublin company Hibergene
4 Should AIB compensate me for upsetting letter on arrears?
5 Why bosses should not be afraid of speaking out on Instagram
6 How to turn racists’ genetic arguments against them
7 Irish economy to grow by 3.4% this year, predicts EY
8 Artomatix buyer revealed as Unity Technologies
9 Takeda selling off its Dunboyne facility
10 Competition in denim market makes Levi's a fashion victim
Real news has value SUBSCRIBE