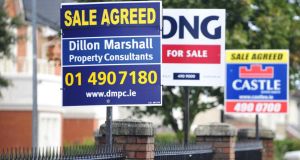 The OECD did not say which measures it would favour to stop the property market overheating. Photographer: Aidan Crawley/Bloomberg

The Organisation for Economic Co-operation and Development has warned that rapid rises in Irish property prices are “reminiscent of the bubble period of a decade ago” and has called on the Government to act on the issue.

“Further macro-prudential tools should be used, if necessary, to prevent investors becoming excessively exposed,” the OECD said in its annual Economic Outlook, published yesterday. The Paris-based body did not specify the interventions it would favour.

The warning was contained within a generally positive assessment of the Irish economy, which, the report noted, enjoyed the fastest growth in the OECD in 2014, at 4.8 per cent. The OECD predicts 3.5 per cent growth for Ireland this year, slowing to 3.3 per cent in 2016.

The OECD also expects economic policy to “exert a smaller drag on activity” than in past years and urges the Government to use strong revenue growth and low interest rates for more rapid reductions in public debt.

For the global economy, the OECD cut its growth forecasts, predicting growth of 3.1 per cent in 2015 and 3.8 per cent in 2016, down from earlier expectations of 3.6 and 3.9 per cent respectively. For Europe, however, it was more optimistic.