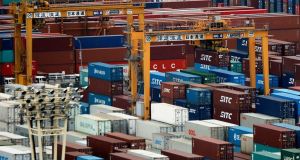 While CSO numbers reflect increasing domestic demand, they also point to a decline in net exports in the same period.

Ireland’s economy grew by 7 per cent in the third quarter of 2015 compared with the same period in 2014, new figures reveal.

The rate of gross domestic product (GDP) growth in July-September - up 7 per cent year-on-year, and up 7 per cent in the year to date - suggests growth for the year will beat Government targets.

Budget 2016, unveiled by the Coalition in mid-October, was predicated on the achievement of 6.2 per cent GDP growth this year and 4.3 per cent growth in 2016.

On Wednesday, however, Minister for Public Expenditure Brendan Howlin raised the prospect of a growth rate this year in excess of 7 per cent.

The new quarterly national accounts, published this morning in Dublin by the Central Statistics Office, reflect increasing output in “all business sectors” in the three months to September compared with the previous quarter.

However, the data also shows that the pace of quarter-on-quarter growth eased in summer and early autumn.

While the figures reflect increasing domestic demand on a quarterly basis, they also point to a decline in net exports in the same period.

Investment activity increased by 4.9 per cent compared with the second quarter and personal consumption, the largest component of domestic demand, rose 0.7 per cent. Quarterly export growth of 2.2 per cent was outpaced by 5.4 per cent growth in imports.

The volume of activity in the industrial sector rose 2.5 per cent quarter on quarter, a rise which includes a 1.2 per cent increase in construction activity.

The volume of activity in “other services”, which includes the financial and insurance sectors as well as health and education, rose 1.4 per cent and activity in the distribution, transport, software communications sector advanced by 1.3 per cent. Agriculture, forestry and fishing activity rose 11.4 per cent.

Measured on a gross national product (GNP) basis, which strips out the impact of multinational profit flows, the economy contracted by 0.8 per cent in the third quarter. This compares with 1.9 per cent GNP growth in the second quarter.